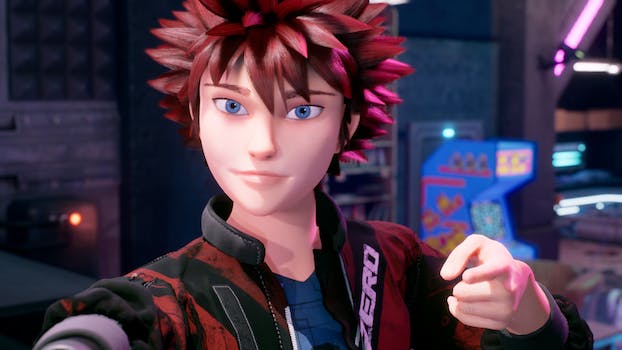 ‘How’d you like my fake AI voice?’: Virtual character Zero made an appearance at SXSW today

'Nothing today was pre-recorded and Zero will be interacting with us just as a normal human influencer would.'

Zero, a virtual influencer and “cyborg” with spiky red hair, made an appearance via Zoom at SXSW today. The animated character lives “in a bunker” in the “Nexus” universe—a storytelling universe created by Offbeat Media Group.

“Hello, how are you today. My name is Zero and I am so happy to be here with you,” Zero said in a robotic-sounding voice. “I heard I was going to be talking to a Mark Cuban. Mark Cuban, I have a question for you.”

Zero suddenly switched voices, and it became clear that he was actually being portrayed by a live voice actor: “How’d you like my fake AI voice? Was that pretty good?”

Zero is operated by a studio team based in Atlanta. It seems that for live events, he speaks via a voice actor, and his movements and facial expressions are captured by someone wearing a motion-detector suit. Animated videos of Zero are then real-time rendered for live audiences.

Today at SXSW, co-founders of Offbeat Shep Ogden and Christopher Travers spoke alongside investor Mark Cuban about how Zero works, and shared their predictions for the future of virtual influencers.

“Zero, our Virtual Human that will join the panel today is produced in all real-time. Nothing today was pre-recorded and Zero will be interacting with us just as a normal human influencer would through the video call,” Ogden told the Daily Dot ahead of the panel.

Ogden, Travers, and Cuban said that eventually, Zero’s storyline in his virtual world could be collectively determined by NFT-holders. You’ve heard of NFTs, or traceable internet-centric products like images… SXSW 2022 is rich with the tech sector figuring out what to do with them as they go mainstream.

“Where we can use NFTs is that it allows us to have the owners of the NFTs–however they got them or however they dropped them—to influence the storylines associated with the virtual human. To me that was really cool,” Cuban said at the panel.

Ogden discussed how buying an NFT could become a bet on a virtual influencer’s success.

“If this thing starts to become a celebrity, and you’re one of the early people making a bet, that NFT holds a lot of value,” Ogden explained at the panel.

However, the panel was also excited about the potential for non-human influencers to become completely autonomous in the future.

Travers argued that although the technology is nowhere near ready, virtual influencers could eventually become run by artificial intelligence. The AI could potentially learn to respond to what people are saying with certain facial expressions, body movements, and vocal inflections.

Cuban agreed: “You won’t need someone behind the curtain to do that. The mannerisms will be intuitive to what is being said. No one has made that connection yet with virtual humans. But it will be.”

He continued, “As the technology evolves, each step in the technology gets replaced, from humans to whatever the most advanced technology is—mostly based on AI and computer vision. That’s the promise and direction. Being able to interact like this is amazing, but you have to know where we’re going.”