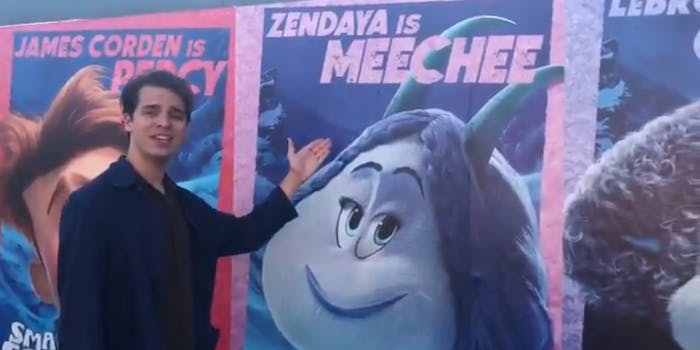 ‘Zendaya is Meechee’ is the feel-good hit of the fall

'Sang my name right and everything,'

In case you haven’t heard, Warner Bros. is releasing Smallfoot in theaters on Thursday. The 3-D computer-animated film is about a Yeti who discovers a human (aka a “smallfoot”) and is forced to prove the creature exists after he’s banished from his village.

The movie stars an impressive list of celebrity voices, including Channing Tatum as Migo, LeBron James as Gwangi, Danny DeVito as Dorgle, and most importantly, actress/singer Zendaya as Meechee.

Why is Zendaya the most important part of the cast? Because it was she who inspired internet sensation Gabriel Gundacker to create the song “Zendaya is Meechee”, basically everyone’s favorite thing on Twitter right now.

Gundacker’s amazing voice and perfect timing make the song the equal to anything you might hear in an animated film, which is probably why his video has been viewed almost 5 million times since it was first posted on September 22.

He’s so goddamn enthusiastic that you can’t help but love it.

This keeps me alive. #zendayaismeechee

I’ve watched this 13 times now and have been reduced to tears with every single listen.

Nobody knows how truly necessary this is until you’ve walked past the same movie posters everyday on the way home.

It even inspired a ukulele cover version by a man who says it “changed my life”.

Zendaya herself even turned out to be a fan. The day after the video was posted she retweeted it, adding that Gundacker “Sang my name right and everything.”

We’re sure the film itself will be full of fun for the whole family, but can it possibly compare to the grandeur that is “Zandaya is Meechee”?  Those are some big feet to follow.