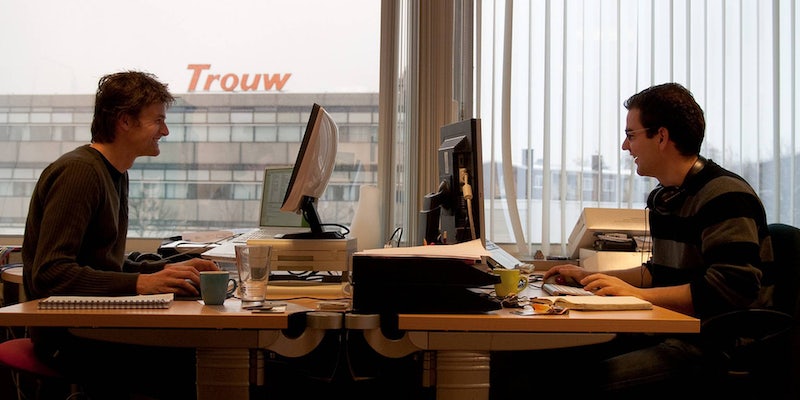 Would employees rather have craft beer or better pay?

When it launched, online retailer Zappos changed the way that digital vendors handled customer service. Now, according to a long profile in the New Republic, they’re also trying to “reinvent the workplace.”

Unfortunately, according to a recent survey of employees in the U.S., the only change that workers want is the exact opposite of what Zappos CEO Tony Hsieh (“everyone calls him Tony”) is trying to do. What workers actually want, it seems, is to be left alone and allowed to do their work—but that’s not stopping companies from trying to change our minds.

Zappos has invested aggressively in “company culture” and has been lauded for it for years. The “uniform” of t-shirts and tennis shoes; the steady diet of Fernet, craft beer, and startup snacks; the Airstream trailer park in the desert; and of course, the offer to pay someone off if they quit their job in their first year is designed, Hsieh explained, to “weed out the people that are just there for a paycheck.”

“The thing about Zappos is that it really might be a model for a new way to build and run a business,” wrote Fast Company’s Steven Rosenbaum way back in 2010.

In some ways, that’s exactly right: Startups, especially, have focused heavily on culture and perks in the last 10 years. Expect to gain “the Google 15” from all the food, and don’t forget to take advantage of Whiskey Fridays, beer bashes, and ping-pong tables. Come to work early for catered breakfast, and be sure to stay for dinner.

These incentives aren’t inexpensive for companies to offer, either. The Bureau of Labor Statistics noted in September of this year that benefits to employees—including basic allowance, like health care, as well the kind offered by “fun” workplaces, like holiday parties and free snacks—account for at least 30 percent of employer expenditure on workers.

What workers actually want, it seems, is to be left alone and allowed to do their work—but that’s not stopping companies from trying to change our minds.

But of course, there’s a benefit for the boss, too: When your workplace has all of the conveniences of your home, you can work longer, stay later, and get more done. No time for laundry? No problem. You can get that taken care of at work, too.

And it’s not just the discounted gym memberships, nap rooms, and dog-walkers that employees are lured in with. Take a job at big tech companies or a startup and you’ll be told all about how you’re part of something, how you’re changing the world, and how you’ll get to be creative in an otherwise dreary world of soul-crushing drudgery (like the kind that’s seen at Zappos’ ultra-square parent company, Amazon).

This is exactly what, as opposed a faceless corporate model, both Gen-Xers and millennials (famously dubbed by Richard Florida as the emerging “creative class”) seemed to crave. We shirked the suits and ties of our fathers and traded them in for untucked vertically-striped button-downs.

But the truth of the matter is that all of the yoga rooms and dog-friendly offices don’t matter if you can’t afford to pay your rent and if you’re still deeply unhappy.

In a survey of over 2,000 individuals, the Faas Foundation and Mental Health America found that “83 percent reported that their company is overly focused on trivial activities.” Additionally, another 80 percent said that, because their workplace is either hostile or unhelpful, they would prefer to work alone.

Couple that with studies indicating that people would rather be paid more than get more time off (just 32 percent of respondents would take four weeks of vacation over an extra $20,000 per year), the pile of research demonstrating how important having a life outside of work really is, and the numerous reports about improved productivity when working remotely and it becomes clear that while Zappos may be trying to reinvent the workplace wheel, they may be spending time, energy, and money on exactly what workers don’t want, rather than what they do want.

Expect to gain “the Google 15” from all the food, and don’t forget to take advantage of Whiskey Fridays, beer bashes, and ping-pong tables.

In most cases, this is just to be able to live comfortably and work toward goals like homeownership or, at the least, not being homeless.

Because it’s not just the bus drivers and service employees who are being priced out of areas like San Francisco and Seattle—a Harvard study from September of this year found that by 2025, nearly 15 million Americans could be spending more than half of their income just to pay the rent. If incomes—which means actual dollars paid, not handfuls of almonds in the office kitchen—don’t at least meet or exceed rent year over year, we could see as many as 25 percent more individuals and families who are considered burdened by their rent. Additionally, just because you work at a startup in Silicon Valley doesn’t mean you’ll be getting paid Silicon Valley rental prices. Startup pay is pretty close to universal, whether you’re in Mountain View or Minnesota.

Though top earners at startups and tech companies can expect a six-figure salary plus perks, there are plenty of others who keep those companies going and still make closer to the median income. They’re expected to embrace “work-life integration” (Hsieh’s term), instead of work-life balance,” even when their life outside of work is potentially financially crushing. And the gap between highly-paid tech workers (for whom perks are added bonuses) and median- or below-median-wage workers (who would probably prefer annual raises instead of free bacon and beer) is growing every year.

That’s exactly what the New York Times reported in July. “Since the beginning of 2014, median wages for all holders of a bachelor’s degree or more have risen 2.7 percent, compared with about 2 percent for all workers,” the Times’ Nelson D. Schwartz wrote. “Among the top 10 percent of earners holding college degrees, however, wages are up more than 6 percent.”

Meanwhile, rents in major tech cities have risen 10 or even 12 percent year-over-year. What’s more, even those highly paid tech workers haven’t really seen their income rise, when adjusted for inflation, since the late 1990s.

And yet, employers are spending more and more on everything but wages. In August, the Washington Post reported, “In 2015… workers will see a flat 2.9 percent increase in base pay on average, but they’ll also see a 12.9 percent increase in ‘variable pay’—things like bonuses, incentives, and other cash rewards—the highest increase in 39 years.” Almost none of those bonuses will be going to clerical or technical workers.

Getting rid of all the bosses, as Tony Hsieh has recommended, could solve the problem of outrageous CEO pay, but it won’t correct the understanding by employers that offering perks in lieu of regular raises and a healthy work-life balance is enough to improve overall quality of life. Instead, employers would be wise to offer enough financial compensation—that’s cold, hard cash—to allow employees to buy the things they want and need and trust that being happy outside of work is enough to create a productive workforce when employees are in the office.