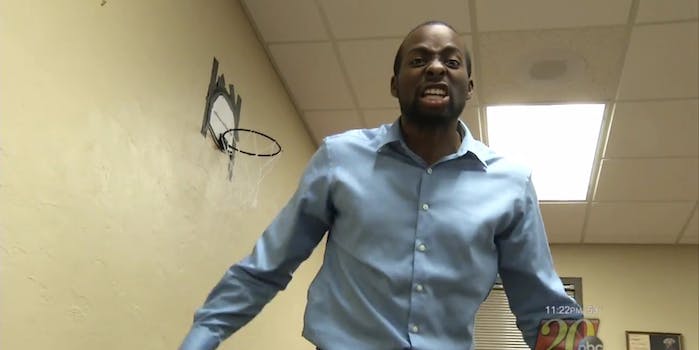 When given copyright restrictions, just make your own game.

One local station isn’t going to let something as minor as copyright restrictions to prevent them from covering the news.

WCJB reporter Zach Aldridge was in the studio to cover Florida’s win over Dayton, but since he works at an ABC affiliate and the footage is owned by CBS, he didn’t have the rights to air the footage right away.

“I can’t air any of it until tomorrow without breaking the law and every other rule and regulation known to TV, but I still want to show you guys what happened in Memphis today, so I present the next best thing: TV 20’s version of the game,” Aldridge explained.

And sure enough, he and his fellow colleagues put on a hell of a show, full of sportsmanship, enthusiasm, and dunks that even gained the approval of the University of Florida.

It’s probably not as good as the game itself, but if Florida wins it all, he needs to do this for the rest of the games.