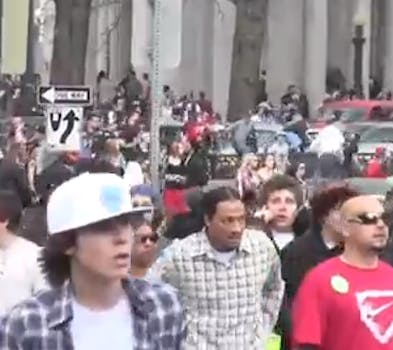 A YouTube video documenting a shooting in Denver has helped police identify the likely individual behind the attacks.

A YouTube video documenting a shooting in Denver has helped police identify the likely individual behind the attacks.

Shot by Denver local Brandon Morse, the video details the events surrounding Saturday afternoon’s marijuana rally at the downtown Civic Center, one that ended with gunfire and three injuries.

Morse, who does not have a history of citizen reporting, started recording video and interviewing rally-goers shortly after the bullets were fired.

One of the first scenes he shot showed a man running from the scene before slowing down and walking nervously amidst a frantic crowd. Police believe that’s the man who opened fire.

“We are seeking this individual as we believe he assisted the primary suspect after the shooting,” Denver police department spokesman Sonny Jackson told the Denver Post on Sunday. “He is the black male with a brown-and-white checkered shirt between the male in the red shirt and the male wearing a white hat.”

We were about 50 feet away from this group of black males,” said one rally attendee, who wore a red hoodie. “They started yelling at each other and saying shit, and then one of the guys started taking off and running. It was crazy, just four or five shots. Everybody dropped to the ground and started running.”