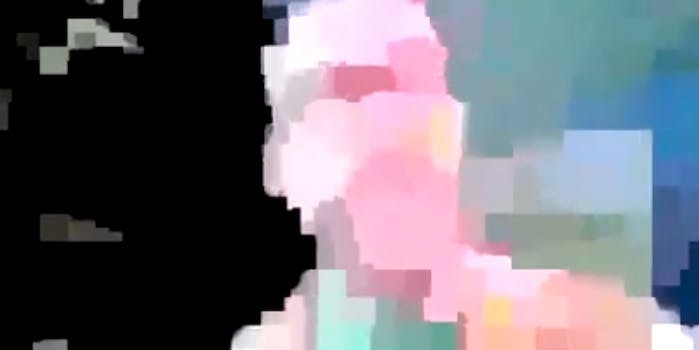 Copying a YouTube video 1,000 times is a descent into hell

“What if the camera / Really do / Take your soul?”

What happens when you copy a copy of a copy of a YouTube video? Not much. For some really interesting results, you have to do it 1,000 times.

Chicago video artist Patrick Liddell spent a year uploading a video to YouTube, downloading it to his computer, then re-uploading the copy over and over again, repeating the process until he reached 1,000 generations. He called the project “I Am Sitting in a Video Room,” an obvious nod to Alvin Lucier’s groundbreaking experimental composition from 1969.

The video starts off normal enough—Patrick standing in a room reading a statement about what he’s doing. “I am going to upload [the video] to YouTube, rip it from YouTube, and upload it again and again, until the original characteristics of both my voice and my image are destroyed.” He speaks very clearly so you can understand what he’s saying, copy after copy. After about the 100th generation, that won’t matter.

The image and sound start to get distorted at around copy No. 25, which occurs at the 1:00 mark. At 100 copies (1:28), Patrick starts to look like a fleshy blob, and his voice starts to sound like an old record being played backward. At 500, his image and voice are barely human. At 1000, he transforms into something else… something strange, something terrifying.

The creepiest part may be that this process of distortion doesn’t only happen with YouTube videos. There’s a name for the phenomenon: generation loss, and it’s observed in all other recording formats. “I Am Sitting in a Video Room” is based on an audio experiment undertaken by composer Alvin Lucier, who used the same copy-of-a-copy process on an audio recording of his voice, and it produced similarly haunting results.

The method was also attempted in 2008 using a VHS tape of a music video by the band Roxette. The final generations of the tape resemble less a peppy Swedish ’90s pop band and more a descent into the depths of hell. The second-to-top YouTube comment on the VHS version, by nkcsb115, says, “This is what you see and hear when you start to die.”

So why does generation loss cause such creepy results? Why doesn’t the image just fade away, the sound get softer until it disappears? Lidell offers this explanation, “It gets complicated, but each translation of the audio goes through a process … which breaks the audio down into more easily parsed tones. This process loses a bit of subtle information, which is accumulated.”

Essentially, what you’re seeing and hearing are not garbled deviations of what was once recorded, but a manifestation of the computer itself. Patrick explains, “What you will see and hear, then, are the artifacts inherent in the video codec of both YouTube and the mp4 format I convert it to on my computer.” In other words, these terrifying sounds and images are the computer talking. The computer is speaking to us in its native tongue.

The evil aura of the camera has long been stuff of legend. The new Arcade Fire song, “Flashbulb Eyes,” for example, suggests that in a world where the recorded image of life is beginning to dominate the real thing, maybe we should start taking that question seriously.

“What if the camera / Really do / Take your soul?”