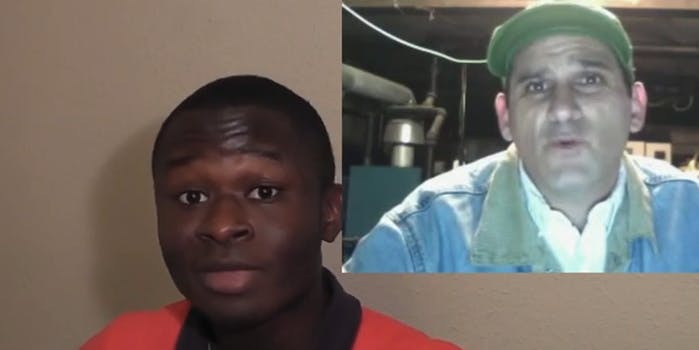 This viral racist soccer rant isn’t what it seems

Billy Bob Neck’s racist, homophobic rant about soccer will piss you off, and that’s exactly what he wants.

His gripes about soccer range from the sport being full of “Mexicans from Brazil” to President “Barack Osama Homo bin Laden” using it to promote socialism and placate Americans. This, obviously, is so United Nations forces can take over without much trouble.

Bady masterfully took down every illogical, idiotic aspect of Neck’s diatribe, albeit with some homophobia of his own when he urged Neck to “penetrate” himself.

His scathing commentary on Neck’s clip is stuck at 301 views on YouTube, a clear sign it’s going viral. However, Bady might have missed that Neck’s ridiculous video, which has 400,000 views itself, is actually a work of satire.

Comedian Paul Day created his Neck character to parody Christian conservatism during the 2004 presidential election campaign. “If I get someone to say ‘I would never vote Republican again because of [Neck],’ that’s a win,” he said in a 2008 interview.

Neck gained notoriety in 2010 when Rachel Maddow featured a clip of him describing her as a “lesbian vampire.”

Bady raised Neck’s profile once more. But if the U.S. becomes a socialist nation, as Neck fears, he’ll soon be back to relative anonymity.