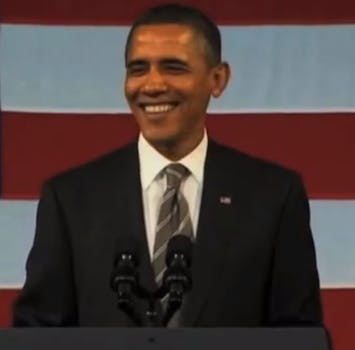 YouTube has decided that a snippet of the President singing Al Green's "let's stay together" doesn't violate copyright.

YouTube has restored an advertisement for Mitt Romney featuring footage of President Barack Obama singing a line from Al Green’s classic “Let’s Stay Together,” saying that the video does not actually infringe on Green’s copyright of the song.

The 30-second ad, a message from Romney’s campaign suggesting that Obama has eschewed the middle class for those holding enough money to donate to his campaign, posted to Romney’s YouTube channel on Tuesday but experienced an awfully brief shelf life.

After only a few hours online, music publishing behemoth BMG Rights Management filed a complaint on behalf of Green, saying that the video violated the soul legend’s copyright. YouTube removed the video from its site shortly thereafter, forcing Romney’s camp to repost the advertisement on Vimeo.

According to Politico, the Romney campaign issued an appeal letter to YouTube on Wednesday stating that the footage in the ad fell under a fair use clause outlined in the Digital Millennium Copyright Act and should be allowed to remain live on site.

A spokeswoman at YouTube told Politico that the site will remove any video that has been flagged for copyright infringement but that it also has a “counter notification process in place if a user believes a content owner has misidentified their video.” YouTube will will reinstate the previously removed content if the appeal is found to be correct.

Speculation is mounting that the video shouldn’t have been taken down in the first place. As the Daily Dot pointed out on Tuesday, YouTube removed Romney’s ad but failed to take notice of the bevy of YouTube clips showing Obama singing “Let’s Stay Together” that have lived on the site since January.

Al Green, it’s worth noting, is a longtime supporter of the President who told reporters after seeing Obama’s rendition of “Let’s Stay Together” that “he nailed it.”