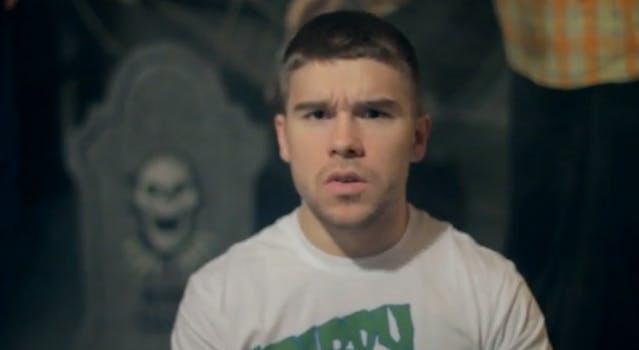 The YouTube rapper formerly known as Krispy Kreme is now spitting out lyrics under a different name.

The YouTube rapper formerly known as Krispy Kreme is now spitting out lyrics under a different name.

Forced to change his name by the donut chain Krispy Kreme (or so he says), he went with another alliteration and will now call himself Froggy Fresh, which was one of the six names he debated on in a video posted to YouTube late Tuesday.

Because he was good at catching frogs—as good as he is now at “killing the rap game,” he explains—he chose Froggy Fresh.

Right off the bat, Froggy Fresh, who some say is a fellow named Tyler Cassidy, addressed criticism that he won’t be a good rapper anymore. This isn’t the case, he says. In fact, he could care less what he’s called, because his music will still be amazing no matter what.

“You can make me Poop Face Pete or you can make me Turd Face Tommy,” Froggy Fresh said. “You can make me whatever you want to. It doesn’t matter what my name is. In fact, you know what we might do? I might just change my rap name every single album.”

He and Money Maker Mike want to prove themselves to their fans, and they’re already planning to release a new song very soon—which Froggy Fresh says will be amazing because, as he put it, he “don’t even know how to make a bad song.”

The rapper hopes that people will see that he is bigger than his name. Some of his fans have already shown that the name doesn’t matter.

The decision for Froggy Fresh to change his name wasn’t purely a creative one. He revealed in a video posted Dec. 4 that he was contacted by Krispy Kreme and told to change his name. His dad agreed and told him to change it before he got into “a lot of trouble.”

If “Froggy Fresh” turns out to be a one-album-only moniker, the Poop Face Pete album is going to be interesting.