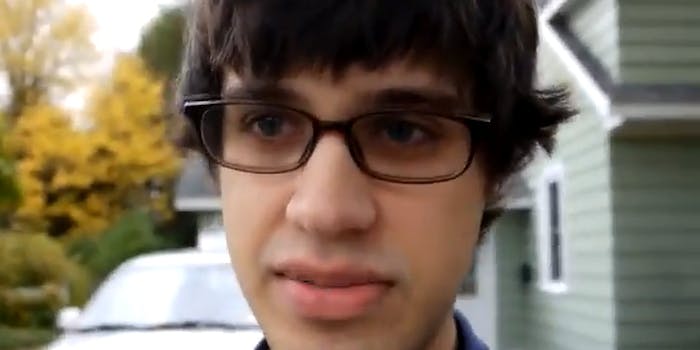 Lombardo could spend anywhere from a minimum of 5 to 15 years in prison for each of the four counts he's been charged with.

Lombardo was arrested this past Friday in Rome, N.Y., by the FBI and held for five days before being released. The papers, obtained by the Smoking Gun, were not sealed until yesterday. Lombardo had to surrender his passport, complete a mental health medical evaluation, and use an electronic monitoring program. He was also given a curfew, forbidden from the Internet, and forbidden from talking to minors.

A Berklee College of Music graduate, Lombardo’s piano rock ballads and tutorials earned him 200,000 subscribers on YouTube. He released one album with  DFTBA Records, though co-owner Hank Green recently issued a statement via Tumblr that the DFTBA pulled the music from its website in light of the arrest.

FBI agent Alix Skelton outlines the charges against Lombardo in a four-page affidavit, claiming that the investigation started after a complaint alleged Lombardo was planning to have sex with a 15-year-old girl on Dec. 28, 2011. The FBI also spoke to two other girls, both 17, who told agents that they sent sexually explicit photos and videos to Lombardo and received sexually explicit photos from Lombardo.

“All three victims advised that they ‘met’ LOMBARDO online because they were fans of his music,” Skelton wrote.

The FBI then obtained a search warrant for Lombardo’s house and several of his electronic devices, where they found video and photographic evidence of minor girls who masturbated on Lombardo’s computer.

A 16-year-old girl who knew Lombardo “because he worked at her school” came forward in March and told FBI agents that she and Lombardo would send photos “to see who would go farther,” according to the affidavit.

The investigation came to a head when Lombardo was arrested on July 20.

Lombardo has been charged on four different counts. If convicted of the counts against him, Lombardo could spend anywhere from a minimum of 5 to 15 years in prison (the shortest sentence for the four counts separately) and up to a maximum of 100 years if convicted of all counts.