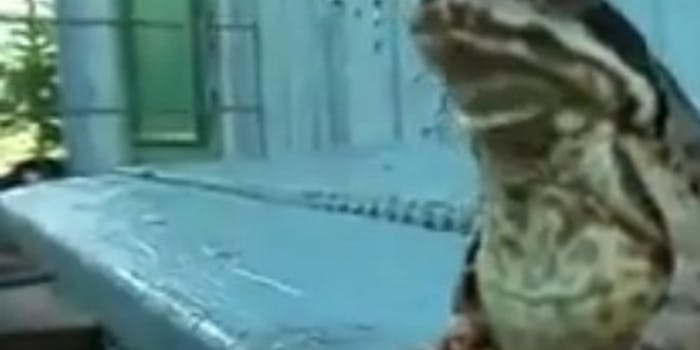 It's not easy being green.

“A Frog Sitting on a Bench Like a Human” is exactly what it sounds like, and it’s making the Internet go wild.

In the 43-second video, uploaded to YouTube on April 23, a frog sits on a wooden bench or shelf in an upright position. Video views are frozen at 344 views due to mass interest. (That means YouTube’s servers are having a hard time verifying views.)

The reason for the mass interest, besides the novelty of an amphibian displaying human-like characteristics, are the theories as to why the frog is sitting like that. Both Reddit and YouTube are swirling with different ideas, with both online communities agreeing something is not right with the amphibian.

“Not to be a debbie downer, but usually when animals do these weird/cute things it’s more often because they’re sick or dying than it is the thing we’re anthropomorphizing,” wrote dingleberryblaster on Reddit, before citing other examples like “the ‘snoring’ door mouse” and “fat squirrel in the bird feeder.”

On YouTube, user Konoko570 is convinced the frog is nailed to the board based off footage seen at the 0:36 mark. Konoko570 calls the video uploader a “mother fucker who did this just to earn views” and urges fellow YouTubers to upvote his or her comment so that it stays on the top.

At press time, Konoko570’s “call to arms” had more than 50 likes and was prominently displayed on top of the comments section.

“Congratulations, you win the ‘piece of shit of the day’ award,” wrote diagonalofmay on YouTube, believing the frog in the video to be nailed to the wooden shelf.

“In addition, flag it﻿ as inappropriate under animal abuse” added phaze421. If the allegation is true, the video would be in violation of YouTube’s community guidelines and subsequently removed from the site.

On social news Reddit, users there have taken to addressing  Konoko570’s comment about the weirdness in the frog’s back, dismissing the notion that it is a nail.

“That would be the end of his urostyle and illium I believe (the bones in frogs that connect to the end of the vertebrae)” wrote synapticimpact. “Take a look. http://i.imgur.com/Og8q5.jpg”

Phew. So the frog isn’t nailed to the wood.

“The frog sits like a﻿ human being because CIA is using HAARP to manipulate its frog brain” wrote Grimbot2 on YouTube.

Kermit was right: It’s not easy being green.