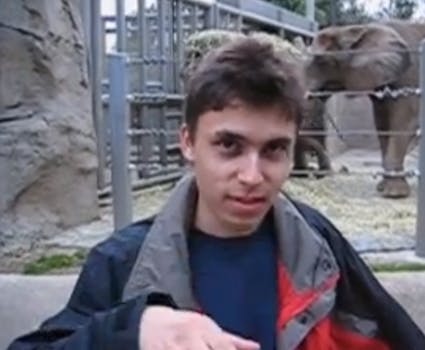 Today is the 8th anniversary of YouTube’s first video

Happy 8th birthday to the first YouTube video of all time, a video of site cofounder Jawed Karim standing outside of some elephants at the zoo.

The Daily Dot would like to extend a hearty happy 8th birthday to the first YouTube video of all time, a 20-second video of site cofounder Jawed Karim standing outside of some elephants at the zoo talking about the length of their trunks.

“The cool thing about these guys is that they have really, really really long trunks, and that’s cool,” Karim said quite nobly on that blustery April day. “That’s pretty much all there is to say.”

Hardly. YouTube has had all sorts of things to say in its eight year history, with sermons and opinions ranging from “Charlie bit my finger” to “Hide yo kids, hide yo wife” to the deliriously popular “Gangnam Style.” It’s so popular and influential that more than 800 million people use Karim and company’s baby every single day.

Today’s iteration of YouTube hardly functions the way that Karim’s original utilization of the site worked in any way. Sure, there are people talking about elephants at the zoo, but the site, now owned by Google, also offers news broadcasts, music videos, and high-cost original web programming. People who use YouTube as a hobby can go on to lofty heights and sometimes make up to six-figures a year. It’s a beast with eight backs. It’s the largest Web community we know.

That said, there’s a whole bunch of shady stuff that goes on—so be careful. YouTube prides itself on being a safe community, but the site’s brass has no way of monitoring the excess of 72 hours of video uploaded onto its servers every 60 seconds. It’s literally unmanageable—there is nothing YouTube can do about. And so, because of that, they don’t answer their telephones.

Who knows what the next generation of YouTube may hold, but one thing’s for certain: there will always be elephants.