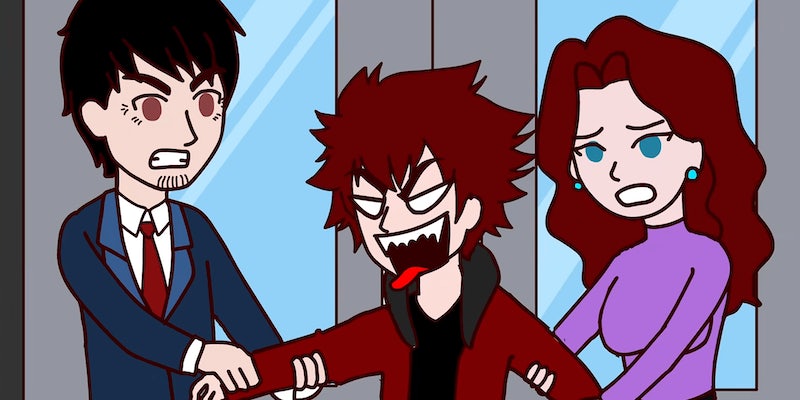 “Hey, I’m Flavia and I grew up in a small and boring town in the U.S.,” a crudely-drawn cartoon girl narrates at the beginning of “I Have 10 Kids at Age 18.” “I hated everything about my life, except my boyfriend. He was pretty cute. But then the unimaginable happened. I got pregnant at 14.”

What follows is a very light-hearted telling of a “true” story about a girl who intentionally gets herself pregnant for attention. “I loved walking through the streets with my big belly at age 14 and everyone staring at me,” the cartoon girl says.

Wait—is that how teenagers talk these days?

Clearly it must be connecting with viewers in some way, because despite its outlandishness and the light-hearted way it plays with the serious subject matter, the video has a staggering 8.8 million views. The channel, Share My Story, is just one of dozens of YouTube accounts devoted to animated storytelling. Each channel touts itself as being a story platform where teens can send their true experiences and get them animated and shared with the world. It’s an interesting concept, which channels like StoryBooth have been doing for years. But recently, there’s been a surge of copy-cat accounts sharing stories that sound a little too out-there to be true.

“I Woke Up After Coma and Now 6 Unknown Kids Call Me Mom!” reads a video by Dory Story. All the story channels rely on hyperbolic sensationalism to get people to click. At their best, the titles are weirdly hilarious. Take, for instance, “My Crush Has Been Secretly Living in my Wall!” or “A Snake Bit Off My PENIS!” However, at their worst, they’re sexually suggestive, exploitative, and straight-up misleading. For example, “My Parents Learned My Dirty Secret Through a Webcam in My Room!” or “My Stepfather Got Me Pregnant Two Times And My Mom Has Been In A Coma!”

After the videos entice with their whacky (and sometimes taboo) premises, they all usually start off the same, with the narrator introducing themselves as an ordinary, American teen who happened to have something weird happen to them. What follows is a long, meandering 10-minute video explaining a story that may or may not have anything to do with its clickbait title. The videos usually end with a PSA-style plug that fishes for engagement amongst its mostly young viewers.

“Have you ever felt like no one wanted you?” a cartoon girl asks at the end of “I’ve Got to the Hospital Because of My Brother! Nobody Believed Me This Could Happened!” “Tell your loved ones about your feelings.” The commenters, however, seemed less interested in sharing their feelings and more interested in discussing how the narrator could possibly get pregnant from someone ejaculating on a towel (which, weirdly enough, was the main story in the video).

And if the questionable grammar in some of the titles looks odd, that’s because many of the channels aren’t based in the U.S. My Story Animated is linked to Zvoid, a content marketing company based in Israel, and Dory Story is run by DizarX, a Russian animation studio that tongue-in-cheekily describes itself as “clickbait.”

ACTUALLY HAPPENED, the most popular of the animated story channels with over 3 million subscribers, is owned by TheSoul Publishing, which has offices all over the world but is headquartered in Cyprus. Many of the channels’ harshest critics are convinced these channels are nothing but “foreign content farms” creating fake content for impressionable American teens.

“This channel takes stories from the internet or completely made up stories and presents them as firsthand experiences told by American teenagers for American teenagers,” Change.org user Antony Okoro wrote in his petition to shut down ACTUALLY HAPPENED. “These ‘stories’ range from light-hearted to sad and depressing. However, since these are all fake or copied, they are emotionally manipulating their audience to gain views and subscribers.”

YouTuber Jarvis Johnson is probably the biggest critic, uploading several videos over the past year criticizing not only story channels, but also YouTube for allowing the genre to become so popular.

“I can’t believe this isn’t a bigger deal to people,” he said in a video. “People protested The Simpsons because Bart talked back to adults. Most of these videos have more objectionable content than anything that’s animated on television right now.”

Jarvis also uncovered one of the biggest smoking guns when he obtained an email that allegedly proved ACTUALLY HAPPENED used scriptwriters to write their stories, not real teens. The email was sent to him by a Reddit user who applied for a job at TheSoul Publishing, the company behind the channel.

“A scriptwriter is the individual who is fully responsible for the quality of stories told by our characters,” the email allegedly said, which Jarvis read in full in a video. “Stories ought to sound like they’re being told by a real teenager and be as close to real life as possible without creating a sense that they’re fake.”

This isn’t the first time TheSoul Publishing has come under fire, either. The company has also been accused of creating “downright dangerous” life hack videos for their other channel, the insanely popular 5-Minute Crafts. And last year, the company even got called out by Rachel Maddow for creating an inaccurate historical video for their channel, Smart Banana. In response, TheSoul Publishing removed the video and said they would no longer create historical-based content. They also weren’t happy about being painted as a “foreign propaganda machine.”

“While this label is absolutely untrue, and honestly hurtful, these same media outlets did accurately bring to light factual mistakes in a very small portion of the videos which we created,” they wrote in a statement. “The videos were loose with facts and at times conveyed incorrect information.”

When the Daily Dot asked TheSoul Publishing specifically if the stories on ACTUALLY HAPPENED were real or not, their spokesperson didn’t confirm or deny their authenticity. Instead, they said the channel aims to “highlight truly unique perspectives, giving a voice to those who don’t necessarily have one.”

This seemingly altruistic mission to share captivating stories as a way to connect with teens is echoed across the other story platforms, too. MinuteVideos, in particular, says their videos are created “to give every person a voice through stories they feel can help others around the world.” And unlike other story channels, MinuteVideos tries to separate itself from the rest by being more transparent.

In a live Q&A video, MinuteVideos employees explain that their videos are “as real as it can get.” Not only do they conduct personal interviews with all their subjects, they also do plagiarism checks to make sure the stories haven’t been stolen or copied.

However, take a quick glance at their channel and it’s hard to differentiate it from other animated story accounts with video titles like, “An Intern Held Me Down and Took Advantage of My Body” and “He Finished in Me With My Tampon Still Inside.” Although MinuteVideos deserves credit for at least approaching serious topics with, you know, seriousness, it eclipses a bigger issue with all the animated channels: their reliance on sexually suggestive topics to get clicks.

Most of the story channels are obsessed with dark topics, particularly teen pregnancy, incest, and statutory rape. Although some of the smaller channels have no qualms with going full force into some disturbing subject matter without much care (“I Got Pregnant in Elementary School!”), the larger channels are more strategic with how they bait controversy.

ACTUALLY HAPPENED has a video titled “My Stepbrother Comes Into My Room Every Night To…” The video is about a 13-year-old girl who has a weird little stepbrother who likes to come into her room and watch her sleep. While the story itself isn’t that bad, the thumbnail for the video is an illustration of a much older woman in pigtails kneeling at a man’s knees while a text bubble over her head says, “You mustn’t do this!”

Share My Story is also guilty of this, using a thumbnail of a little girl in torn clothing and tears in her eyes with the words “EVIL  UNCLE” stamped next to her. The video in question isn’t even about an uncle.

But like all YouTube phenomenons, eventually the bubble will have to burst. Although the majority of story channels are only a few months old, a few of them have already stopped producing videos after running into demonetization problems. Share My Story hasn’t uploaded a video since December of last year. Their Instagram is full of comments from angry viewers accusing them of being “art thieves.”

Other recent story channels have switched away from shocking pregnancy stories to body horror (“My Heart Is Outside My Body!”) and even coronavirus tales (“I’m Doctor, I Lost My Wife Because Corona Virus!”). Other channels have simply stopped faking the sincerity and feel like desperate cash grabs. One comment left under “We Got Pregnant and It’s My Sister’s Fault” reveals that maybe the YouTube community is beginning to wake up.

“Dude is telling the story of how he smashed his sister as if he’s reading a children’s book,” the commenter wrote.

Tiffany White is a freelance writer who's been published in Vice, HuffPost, and elsewhere. She covers pop culture and "weird Internet stuff"—whatever that is.