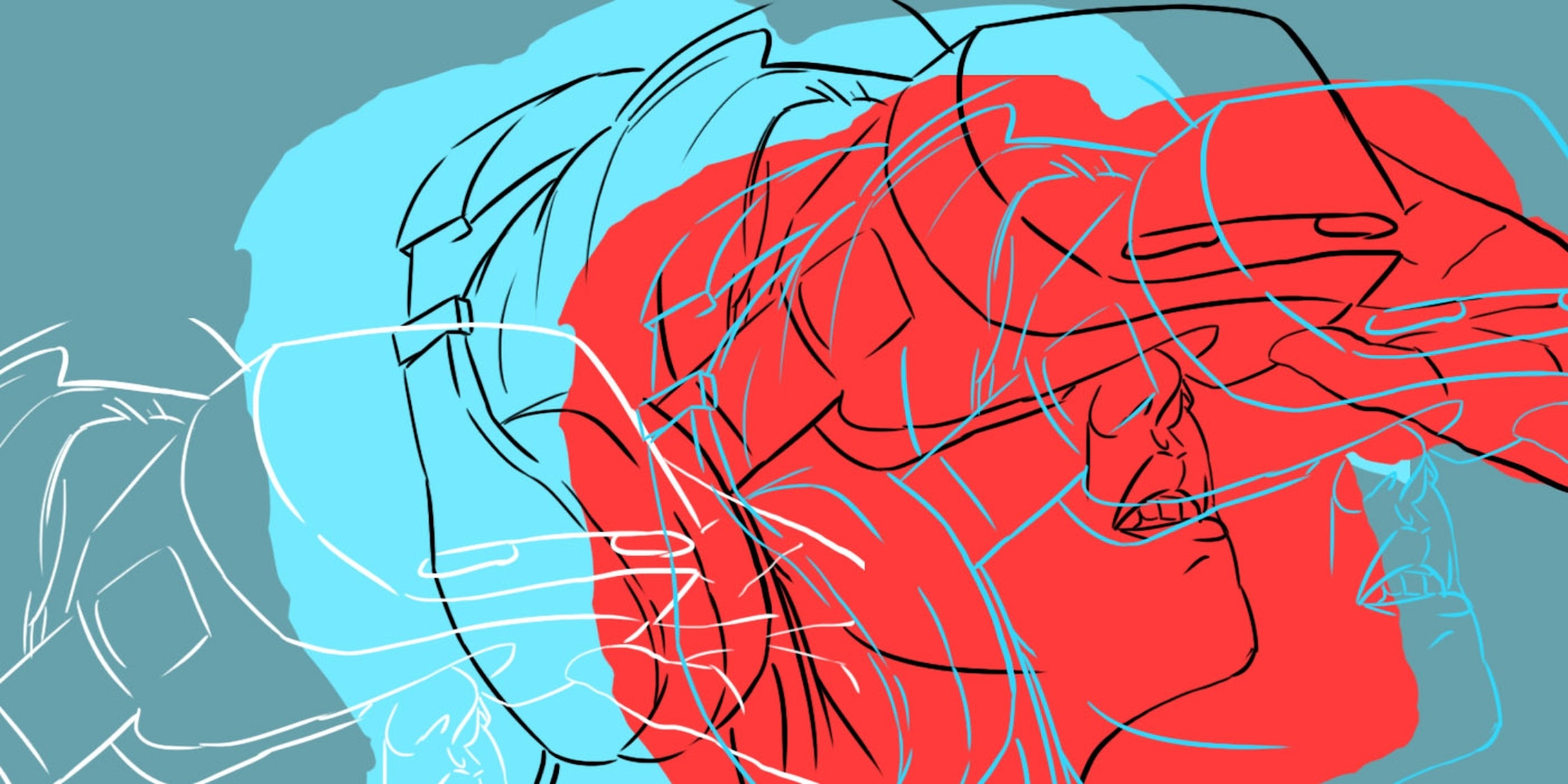 The dawn of virtual reality is finally upon us.

After years of wide-eyed promises and hyperbolic speculation, the dawn of virtual reality is finally upon us.

This week, the Oculus Rift VR headset began shipping to customers in its final, ready-to-play form. The $1,500 bundle comes with the trademark Oculus headset as well as a high-powered ASUS desktop computer made to handle the high-quality graphics and processing power demanded by virtual worlds. The coming of Oculus—which follows competitors like Samsung and HTC—is likely to mark the official start of the consumer virtual reality experience.

While gamers and enthusiasts might be filled with joy, the risks of VR have been greatly understated. The staggering amount of a time a modern American spends in virtual worlds—either through a television or computer or smartphone—is making us gradually more anxious and a depressed.

The staggering amount of a time a modern American spends in virtual worlds is making us gradually more anxious and a depressed.

Devices like the Oculus Rift are promising to further strip us of the physical awareness that cognitive behavioral therapy teaches us is crucial to relaxation and calm. While moderation might be the key to everything, our current use of technology should be the only sign we need that virtual reality will only deepen the mental and health effects caused by its predecessors.

The damage caused to our bodies and minds by our time in cyberspace is well-documented and beyond argument. The American Psychological Association has released numerous reports on “the psychological toll of the smartphone,” citing study after study after study finding strong positive correlations between heavy smartphone usage and the symptoms of anxiety, depression, insomnia, and other symptoms of mental illnesses. Video games may produce some cognitive and problem-solving benefits, but they also make even moderate gamers more anxious socially phobic. The oft-mocked psychopathology of Internet addiction is breeding generations who seek to calm the symptoms of heavy Internet use with more Internet use.

Virtual reality is no different a false escape—and is likely worse.

Early adopters and developers of VR content and hardware reported “virtual reality sickness”—a form of motion sickness caused by the disconnect between an immersive visual world that simulates movement and action and a body that is typically static. Oculus founder Palmer Luckey recently described the jump between VR and the real world as no more a mental shift than leaving a movie theater, but the many threads, mods, and websites solely devoted to calming the VR-fueled mind and body would say otherwise. Samsung and Oculus even warn users to take ten minute breaks every thirty minutes and ask them to avoid driving or operating heavy machinery if such effects last long after they’ve left the virtual world.

It is hardly a problem that can be separated from virtual reality. Much of the damaging effects of smartphone or Internet use come from the very facts of the technology itself. Screens, as much as what we do with them, distract and stimulate our brains in ways that breed addiction and all that comes with it. Psychiatrist Victoria Dunckley has argued for the formal diagnosis electronic screen syndrome. She cites numerous studies finding more screen time, no matter the content, ends up damaging the grey and white matter of young brains, particularly in the areas heavy on empathy and impulse control. Optometrists and ophthalmologists have warned for years about the effects screens have on eyesight, but less well-noted are the severe neurological effects.

Many aside from myself and other worrisome luddites fear the implications of virtual and augmented reality systems for the human brain. The late New York Times culture editor David Carr compared Microsoft’s HoloLens headset to an episode of Black Mirror while expressing fear “the amount of actual, unencumbered reality we experience seems endangered.” The Atlantic’s Monica Kim worries “VR’s advanced, immersive capabilities might bring more severe cases of social isolation to the public’s attention” the way video game addictions did a decade ago and television did a generation before that.

Perhaps, then, the answer is pure moderation. After all, a few researchers and experiments have found success at using VR to treat mental illness and reduce anxiety. Reviewers have raved about Deep, an ocean exploration game for the Oculus that is meant to calm one down from an anxiety attack. Last year, Wired profiled River, a VR startup specializing in games meant to assist in exposure therapy for people with OCD or other phobic-centric disorders. Perhaps the specialized nature of VR can allow it to actually serve as an escape from the chaotic life created by other forms of technology.

When it comes to technology, we tend to act like a beggar at a banquet.

But if VR becomes as ubiquitous as its inventors and investors hope, there’s a fat chance anyone will utilize the self-control such an incarnation would require. While you might shrug off phrases like “smartphone addiction” or “Internet addiction” as only applying to shut-ins who would let their children starve before abandoning a World of Warcraft raid, research indicates it’s far more pernicious than one might suspect.  A study by British psychologists found young adults actually check and use their smartphone at twice the rate than they estimate they do, similar to a drunk who thinks they can drive when they can barely stand.

When it comes to technology, we tend to act like a beggar at a banquet, feasting on the unlimited variety of media, information, entertainment, and interaction with little concern for the mental qualities it leaves us. According to a study by eMarketer, our time spent on smartphones has risen at barely any cost to our times spent in front of a desktop computer and has barely touched our time in front of a TV. In fact, our time spent on mobile devices has more than quadrupled while our time spent on a computer or watching TV has only marginally decreased.

There’s simply no historical reason to trust consumers to back off of VR of their own volition, especially if, like smartphones, it becomes a tool of entertainment and workplace drudgery. Last week saw the unveiling of the Virtual Desktop, an Oculus-ready program that adapts your regular PC to a virtual space. Unless the skeptics of VR’s popularity are right and consumers view it as either too sickening or too dorky for their tastes, there is little evidence to assuage the fear of a technology that could be more inducing of mania, anxiety, and depression as its predecessors.

It is false to blame the technology alone—those like myself who find their mental peace disrupted by too much immersion can practice moderation while everyone else stuffs themselves on fascinating fake worlds. But if the coming of Oculus is meant to spawn a technological upheaval as dramatic as the smartphone—invading our work and personal lives with stealth and speed—it’s likely neither group will ever have a choice.