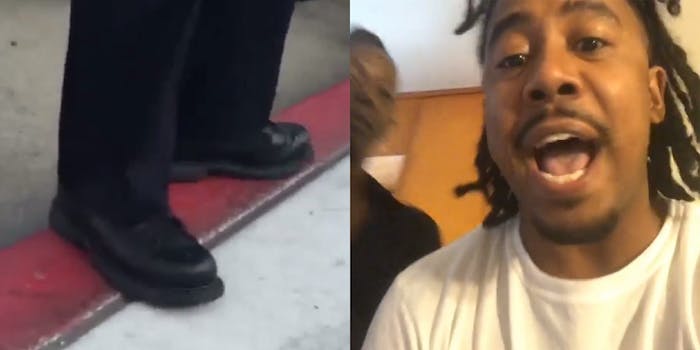 Young Busco, creator of the ‘What are those?’ meme, has died (updated)

He was a father of five.

Brandon Moore, better known as Young Busco, has reportedly died. He was 31.

Melissa Colorado, a Bay Area reporter for NBC, shared the news on Twitter:

@YoungBusco, the East Bay social media comic behind the #Whatarethose meme has passed away, according to his friends. According to a 2015 @vice article, his real name was Brandon Moore and he was a father of 5. #YoungBusco @nbcbayarea pic.twitter.com/LNX1JX1exO

Moore, an Oakland comedian and father of 9 children, recorded the video that launched the “What are those?” meme.

“What are those?” is a sarcastic way of mocking someone’s shoes. The Vine clip of Busco approaching a police officer mid-arrest to comment on his boots went viral in 2015.

Three years later, the meme was referenced in the Marvel film Black Panther. The father of five told HuffPost earlier this year that he had grown tired of the meme, especially since he was unable to profit from its popularity.

“I be depressed every time knowing I didn’t full court press on an opportunity that I created,” he told HuffPost. “I feel good I created something that’ll be with the world forever, but then I feel bad because I didn’t handle my business part correctly.”

Moore remained active on Instagram after Vine shut down, regularly posting videos under the username @youngbusco.

Upon hearing the news, people took to Twitter to express their condolences on Monday.

Another Sad Night in Oakland 😪. R.I.P Busco the real BUSS DOWN KING #WhatAreThose

Update 8:30am CT, Nov. 28: Moore died in his sleep on Sunday morning, according to a report from People.

This post was updated to reflect the correct number of children Moore left behind.