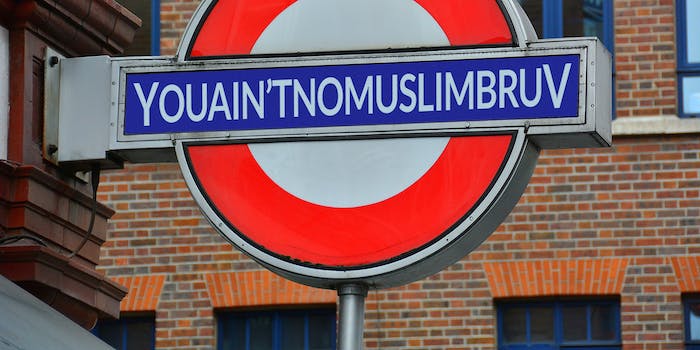 #YouAintNoMuslimBruv is a hashtag for our times

We need #YouAintNoMuslimBruv now more than ever.

I bloody love London. There is nowhere on earth I’d rather be. So I was naturally horrified when, on Sunday, news broke that a machete-wielding terrorist had attacked people riding on the tube, injuring three, one seriously.

That horror, however, quickly gave way to pride and amazement. A video of police arresting the suspect at the Leytonstone station quickly went viral, but the officers weren’t the stars. Instead, an unnamed, unseen Londoner, with typical British understatement, gave us a rallying cry. “You ain’t no Muslim, bruv,” he said, his accent and cutting bluntness capturing hearts around the world and spawning a global hashtag.

To the eyewitness who shouted #YouAintNoMuslimBruv, he spoke for millions of British voices and got the point across directly in 1 moment.

To defeat extremism we must directly challenge their poisonous ideology#YouAintNoMuslimBruvhttps://t.co/MTtZ4XjjoS pic.twitter.com/YK9dcrMCu0

Awful news about attack in #Leytonstone hope all those attacked make a full & speedy recovery. Bystander was right #YouAintNoMuslimBruv

Even Boris Johnson, the mayor of London tweeted it:

To understand why this phrase resonated so strongly, and why the hashtag went viral, you have to put it in both local and global context.

As the British Parliament was debating whether to extend airstrikes against Daesh—also known as ISIS—into Syria, two suspected Daesh-sympathizers were slaughtering people in San Bernardino, California. As news of the Leytonstone attack was breaking, President Barack Obama was delivering only the third primetime Oval Office address of his presidency, addressing the terrorist threat. And as Republican presidential candidate Donald Trump was advocating a ban on Muslims entering the United States, a hashtag coined by a plucky young Londoner was trending on social media.

None of this happened in a vacuum. Leytonstone is just down the road from Walthamstow, another sleepy, working class community in northeast London. Extremely diverse and young (Walthamstow, for example, is nearly two-thirds ethnic minority with an average age of 35), both have been gentrifying over the past few years, with local residents pushing back. (In September, I wrote about Leytonstone residents fighting gentrification for this site.)  This combination of youth and marginalization has created a vibrant activist community, one that has been highly critical of the establishment, including the left-of-center Labour Party, which controls the local council.

So it’s not surprising that local residents, who have been fighting for their community for years, would fight back when a machete-wielding man attacks their tube station. Nor is it surprising that one would make sure the man knew what everyone was thinking. There was an authenticity and a defiance to the Leytonstone lad’s voice. It was a salt-of-the-earth response that showed the best of Britain.

The preceding days, however, showed Britain at its worst. Ahead of the parliamentary vote to bomb Syria, grassroots activists in Walthamstow marched from a mosque to the local headquarters of their MP, Stella Creasy, who at that point was undecided on whether she’d vote for strikes.

It was, from most accounts, a peaceful gathering, with families carrying candles in jam jars and sticking post-it notes with anti-war messages on the windows. But one Facebook post (whether mistakenly or intentionally to discredit the march) claimed they were outside her home, a story that was quickly picked up by mainstream media and retweeted by journalists and campaigners. Local organizers took to social media to counter the claims, and Creasy herself eventually rubbished the story. However, she was forced to temporarily leave the debates on air strikes to address abuse being levelled at her staff, indicative of the tone and tenor of the week.

Hello Walthamstow! For avoidance of doubt I have no reason to believe Tuesday's protest in Walthamstow went past… https://t.co/52QZZiRtw8

For christs sake – I want to listen to debate in chamber but people ringing my office abusing my staff so dipping out to check ok! #syria

In the end, Creasy voted for strikes. Along with other opposition MPs who sided with the government, Creasy began facing both legitimate criticism as well as violent harassment, including being sent pictures of dead children. One young woman tweeted that she hoped Creasy would be “bottled.”  Neil Coyle, Labour MP for Bermondsey, received death threats. MPs voting for strikes had their Wikipedia pages vandalized, with Creasy being labelled a “warmonger” and Ben Bradshaw, an opposition shadow minister, being called a “murderer.”

'Lone Wolf' or not. It was always likely the #SyriaVote would lead some something like the #Leytonstone #londonstabbing

It’s out of this tense, angry debate that a hashtag was born. The Leytonstone attacker is alleged to have shouted “This is for Syria!” as he slashed a man’s throat. Some opponents of Syrian strikes felt smugly self-righteous, tweeting that the attack was a direct result of the vote. Yet this vitriol could not be further from the beautiful understatement of #YouAintNoMuslimBruv.

Whereas some on the hard left employed violent images and threats to express their anger and intimidate their opponents, #YouAintNoMuslimBruv relies solely on its simplicity. Instead of fighting violence with violence, it calls into question the violence itself. It makes the perpetrator face it. It casts doubt on his rationale and indicates a misrepresentation of the values he purports to uphold. Uttered in the aftermath of the Syria vote, when the national conversation in Britain was so tense and polarized, it was a unifying statement around which everyone could rally.

#YouAintNoMuslimBruv is poetically curt, peacefully wounding, and precisely timed. In his speech on Sunday night—the same night as the Leytonstone attack—Obama called upon “Muslim leaders here and around the globe” to “unequivocally reject the hateful ideology that groups like ISIL and al Qaeda promote…” This was a deeply problematic statement, not only because it implicitly indicts all Muslims for the crimes of Daesh, but as Mic’s Jamilah King pointed out, “ISIS is not Islam, just as the Westboro Baptist Church isn’t Christianity. Muslim Americans already know this; it’s up to the rest of America to learn it.”

And here’s where #YouAintNoMuslimBruv went global. The same night the president of the United States called on Muslims to show they don’t support Daesh, a British Muslim did just that. He did it without being prompted and not with a global platform, but on a train platform. Obama asked, and without even realizing it, this young man answered, proving that Muslims don’t need the president to remind them to disown Daesh. They’ll bloody well do it on their own.

I'm Muslim and my mum gets mad if I harm a spider. Islam teaches peace. #YouAintNoMuslimBruv

Hear voice of the person who shouted: #YouAintNoMuslimBruv
It was British. English. London. South London. Human.pic.twitter.com/OI0kDgYASW

We need #YouAintNoMuslimBruv now more than ever. As Leytonstone and Walthamstow continue to reel from this attack and the divisive politics that have engulfed them, as Britain tackles the hateful rhetoric characteristic of its current political discourse, and as Muslims become more maligned, #YouAintNoMuslimBruv will become a powerful tool for not only Muslims, but all of us concerned with justice and fair play. The Leytonstone lad didn’t just speak for London, but for the world.