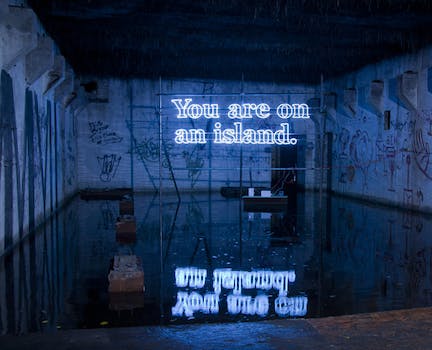 You Are (on) an Island: Provocative art installation makes existential statement

Mike Fleming and Alicia Eggert have turned to Kickstarter to take their work overseas.

Mike Fleming couldn’t sleep. The pain and discomfort of a broken elbow had the photographer tossing and turning late one night at his parent’s home, his mind refusing to turn off. Suddenly, a phrase sprung to mind: “You are an island.” It was oddly comforting and fleeting.

A year later, that phrase now beams as part of a stunning art installation—a large neon blue sign, created with his girlfriend Alicia Eggert, that proclaims, “You are (on) an island,” with the word “on” flashing on and off sporadically. Now, the couple is currently running a Kickstarter campaign to take the sign on the road around England as part of a public guerilla art exhibition. 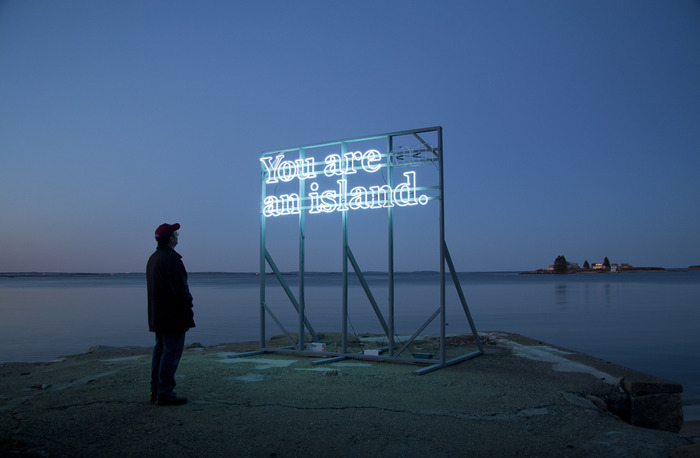 “For me, the sculpture is existential,” Eggert said.

“Its words ask me to consider my own existence and make me aware of my individual perspective of the world. It says, ‘You are here. But why are you here? What does it feel like to be here? What does it feel like to be you?’ But instead of making me feel anxious in the way that those kinds of questions normally tend to, there’s something about seeing the phrase flip so easily back and forth between a simple obvious fact and a complicated existential statement that has the ability to fill me with an utter sense of calm. [The sign] will never stop and wait for the answer because the answer doesn’t matter.”

The Kickstarter campaign aims to raise $12,000 to allow Fleming and Eggert to take the sign to England for two weeks, where they plan on setting it up on the beach and in the middle of roundabouts. The road trip was came from artist Richard Wheater, who promised to exhibit the sculpture at Neon Workshops in Wakefield, England, following the exhibition.

The sign is written in Georgia font and attached to nine-foot high scaffolding. Because of the high cost of shipping the sign overseas, Fleming is unsure whether they will bring the original or replicate it in England. 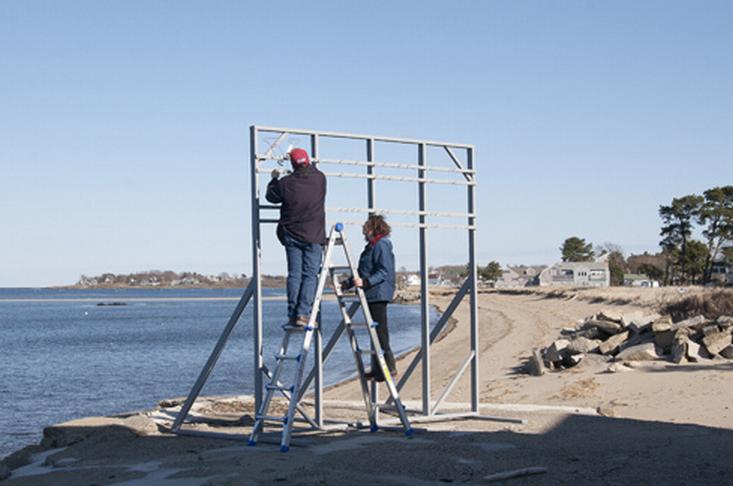 The original was created in September 2011, about a month after Fleming broke his elbow. The couple enlisted the help of Pat Bolduc, a glass-blowing veteran who runs Beacon Neon from his home in Auburn, Maine. The $2,000 project required roughly 50 feet of glass, original patterns, and more than six dozen bends to make each individual letter. The sign was also the first neon art project Bolduc had ever been involved in.

“It’s a great medium,” Bolduc told the Daily Dot. “Unfortunately if you’re an artist who wants to dabble in it unless you want to go through the process of teaching yourself. And it’s one of those things that it doesn’t take a lot to learn but a lifetime to master. Even after 20 years, hardly a project goes by that I don’t learn a little something new.” 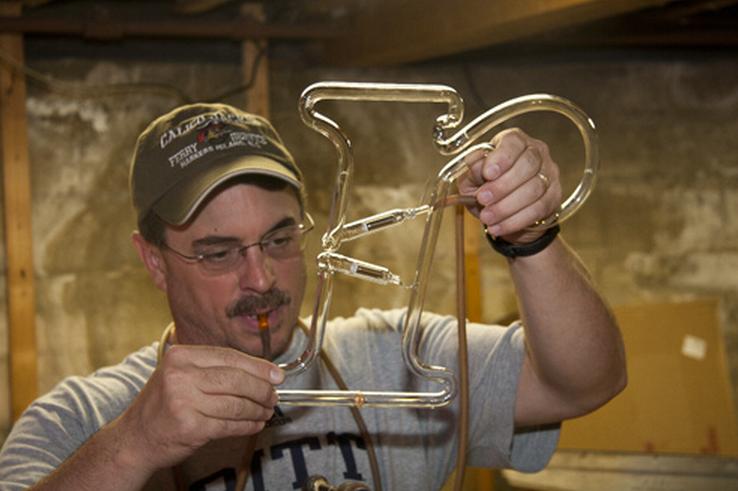 A month after the sign was completed, Fleming and Eggert packed up the sculpture to exhibit it at Sacred and Profane, an arts festival hosted on Peaks Island off of the coast of Maine. The festival was held inside a WWII bunker—the largest of its kind in the U.S.—called Battery Steele, which once protected the Portland Harbor from enemy warships.

The night before the festival Fleming and Eggert traveled to the island to select the space in the bunker for their sign. The room they selected was almost perfect. It was dark and secluded but had one glaring problem.

“It was entirely flooded with gross, murky water,” Fleming said. “There were pipes and things hidden under the water. It was a bit of a sketchy situation. So we decided to assemble some of the scaffolding outside,and carry that in.”

The morning of the festival, Bolduc and two of Eggert’s students from Bowdoin College joined the couple early to help assemble the rest of the structure. Wearing wading boots, the generator was fired up, extension cords were laid, and each letter was attached to the PVC scaffolding just in time for the festival to begin.

“When we saw it lit like that, we were both ecstatic. It was incredible,” Fleming said. “It looked amazing.”

In this case, the spectators truly were on their own island. It was life imitating art. 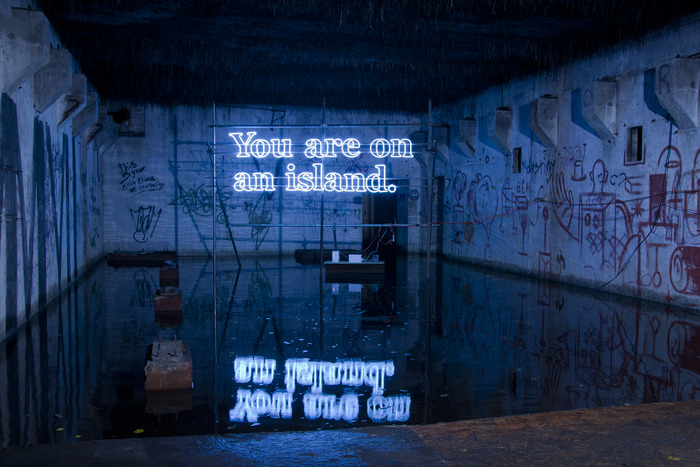