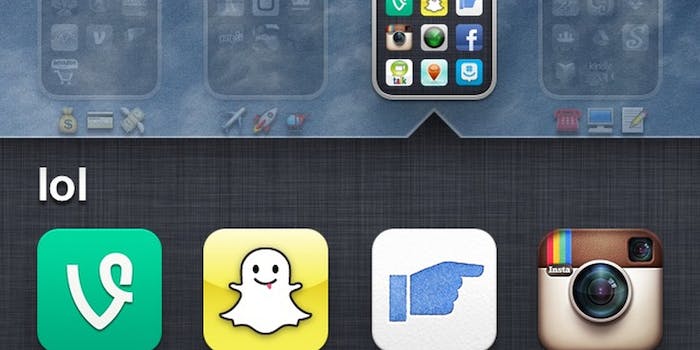 YOLO: “What is a Vine?” and other apps that people are talking about

We use them for one thing. Teens use them for another. Here's a breakdown of the latest apps, their rules, and how to use them.

Have you heard dubstep? Read the #imagine tag on Twitter? Seen the Tumblr of a person under the age of 15? Each week in YOLO, Millennial Analyst* Lindsey Weber picks a new teen trend she doesn’t quite understand and attempts to unpack it before your very eyes.

Like teens with their vast collections of concert ticket stubs and boxed action figures, we keep collecting these apps. Mine are in a folder called “lol,” and yet I find myself opening that folder more and more to send a Poke or a Snap or craft a Vine or share an Instagram.

If you’re not already an app hoarder, distinguishing between these four new, popular apps might be a little difficult. That’s why I’ve created this easy guide to knowing which app to use and when to use them.

Instagram is the old stand-by. It’s been around the longest, and you’ve probably already got a nice following on there—not to mention you’ve also probably memorized all of the filters by now. (In case you haven’t, these are the best ones: Valencia, Earlybird, Nashville and #nofilter. Kelvin is the worst. Don’t be a Kelvin.) But with age come rules, and the Instagram stand-bys are (with few exceptions): “No food, be careful with cliched sunsets, and don’t take too many photos of one…thing.”

What We Use It For: Instagram is for things that are actually beautiful and/or interesting. You can get away with vagueness, or some weird oversaturated snap of your porch, or the view from your rooftop. Those small humblebrags that you’re in Los Angeles this week, while everyone else is back in New York experiencing a cold snap.

What Teens (Seem To) Use It For: If you’re a teen, you might be drawn into the community aspect of Instagram. Instagram communities are formed around hashtags and there are apps (yes, SEPARATE APPS) that can easily copy the most popular ones onto your photos. Do you want to know what the some of most popular Instagram hashtags are according to one of those said apps, TagForLikes? #love #tweegram #photooftheday #me #instamood #cute #iphonesia #fashion #summer #tbt #igers #picoftheday #food #instadaily #instagramhub #beautiful #girl #iphoneonly #instagood #bestoftheday #jj #sky #picstitch #follow #webstagram #sun #nofilter #happy.

Snapchat is the infamous “sexting app” that allows you to send images and videos on a timer before they are “destroyed.” Both “sexting app” and “destroyed” are presented quotes because, as it turns out, most adults aren’t using Snapchat for actual sexting and those self-destructing things you’re sending don’t actually self-destruct.

What We Use It For: No one can actually agree what people are doing on Snapchat, but it from what I’ve seen, old folks aren’t using it to sext each other. It’d be nice to claim that we know better, but maybe it’s because we’re not comfortable taking photos of our privates with the safety of a flattering Instagram filter. I’ve gotten magical Snapchats of lonely walks home, unflattering selfies illustrated with the neon overlay, and nonsense snaps with the word “sext” scrawled ontop. What’s the point? To say hi without saying hi. To show off where you are? To tell a joke?

What Teens (Seem To) Use It For: Speculation abounds (see above), but will we ever truly know what teens are doing on Snapchat? Some signs point to sexting, while others say that teens are using it just like you and I would: to share uglier versions of the photos we’d normally share on Facebook. If teens truly are using Snapchat to sext, and we don’t really have the proof because it’s gone in ~5 seconds, then good for them. They’re using it correctly.

Facebook Poke is just like Snapchat, except it’s connected to your entire buddy list on Facebook. That makes it more dangerous, because if you are using it to send scandalous pics, there’s a small chance you could accidentally send one to your boss. Or your cousin. Or me.

What We Use It For: I am a huge fan of Facebook Poke because it’s less confusing than Snapchat, and I don’t have to know your dumb username to send you a Poke. I can’t remember usernames because I am old. I also happen to live for that little Mark Zuckerberg-spoken “POKE!” alert that announces a message. Download Facebook Poke so people can Poke you. Use it as a gateway drug to Snapchat.

What Teens (Seem To) Use It For: According to my research, teens don’t use Facebook Poke, they use Snapchat. Teens do, however, use Facebook Messenger—but that’s a whole other article.

Ask me in a month, but right now Vine is the most exciting thing to happen to me since…Snapchat. There’s something called Viddy—that’s Instagram for video—that hasn’t quite caught on the way that Instagram did. Vine straddles the void, bringing in the magic of GIFs (remember those GIF apps you downloaded on your phone, but never seem to use?), mixing it with Instagram’s social timeline, and adding in a little twist: tap-to-record “editing”.

*This is not a real thing.