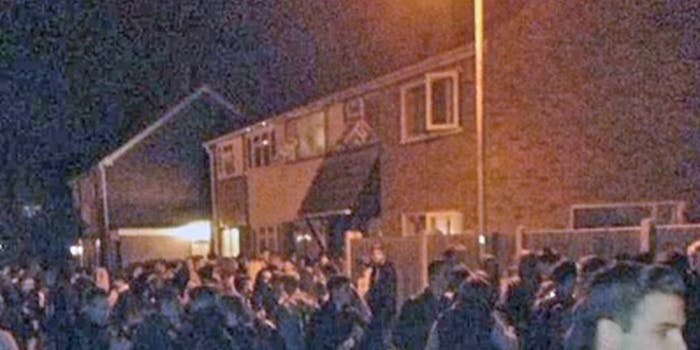 Sarah Hine, 14, invited her friends on Facebook to a party that quickly turned into a boozy brouhaha after the guestlist swelled to hundreds of teenagers and caused thousands of dollars in damage to her family’s house.

Word of the party spread when Hine left the invite open on a school computer for an early celebration for her 15th birthday. She posted, along with her address, “can everyone stop telling me how f***** my house is gunna get after this party .. worth it YOLO”

On Friday, classmates flocked to the Billericay, Essex, home, where absolute pandemonium occurred. Vandals ruined rooms, broke furniture, and even dragged the family’s piano into the front yard and smashed it. It’s estimated that up to $50,000 worth of damage was caused.

Essex police and school officials warned the mother to cancel the party after rumors spread that revelers were going to ruin it, but the mother insisted she would keep an eye out for trouble.

“Police were called following calls from residents regarding nuisance behavior in the street,” an Essex police spokesperson said according to the Telegraph. “Officers found a large number of teenagers had visited the area to attend a party advertised on social media.”

When police got to the house, they described people were “packed like sardines” in the house and empty alcohol containers scattered across the grounds.