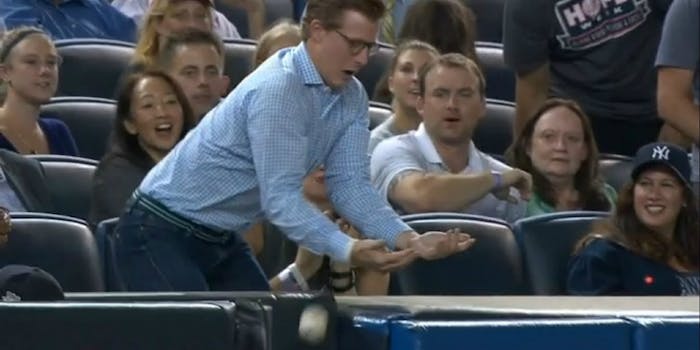 Three strikes and you're out.

If you’re an adult, you probably shouldn’t bring a glove to a baseball game. No matter how close you’re sitting to the action, and no matter how good your chances of potentially catching a foul are, somebody who can drive himself to the game would do better to guard his dignity than dive.

That, anyway, is the theory my baseball-writer friends and I have bandied about for the past several years—the idea being that if you can’t make a catch without a glove (i.e., if you’re not man or woman enough to snag a sizzling ball coming at you with two bare hands and some courage), you should let somebody else have the souvenir.

After watching the guy in the video below, though, I admit that this theory may be incorrect. Because this Yankees fan at Tuesday’s game certainly could have used a glove to catch the ball at least once.

Unfortunate. But glove or not, at least the fan got his ball at the end. Thank goodness for ballboys with soft spots for people who simply can’t catch.