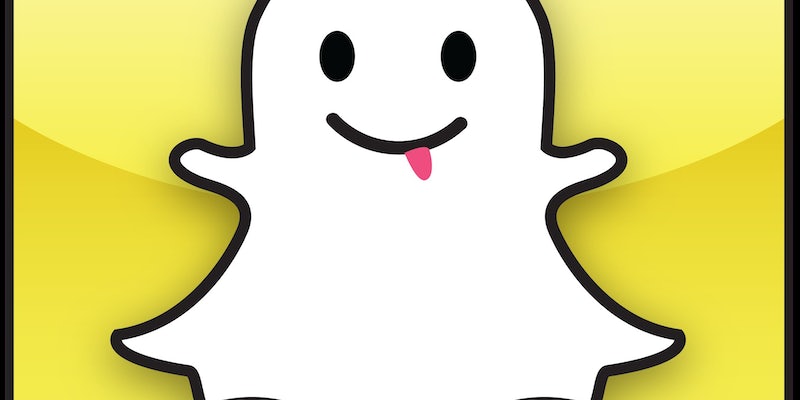 Self-destructing photo app Snapchat is hugely popular at Yale, and not for its infamous sexting features.

The Ivy League has a reputation for being on the cutting edge of social media. Harvard was, of course, the home of Mark Zuckerberg and the birthplace of Facebook. Now Yale students are setting the trend as early collegiate adopters of Snapchat.

A recent blog post from Yale undergrad Sean Haufler highlights the growing popularity of the self-destructing picture app among college students. Originally the domain of high schoolers, the app is experiencing a boom in popularity among Haufler’s Yale peers.

“In September, virtually no one at Yale used Snapchat. Today, it’s huge. To measure Snapchat’s penetration, I went through my phone contacts and counted up all the Yale students who had accounts. 97 out of the 157 Yale undergraduates in my phone have Snapchat accounts. Assuming my contacts are representative of the Yale population [1], then nearly two-thirds of Yale uses Snapchat.”

Snapchat first came on the market in late 2011, the product of several Stanford University students who were reportedly inspired by the infamous Anthony Weiner sexting scandal that forced the Congressman to resign after he accidentally tweeted an embarrassing photo. The basic appeal of Snapchat is that users can send photo messages that automatically delete within 10 seconds of being opened by the recipient.

This has opened the app up to criticism that it encourages “sexting.” But thanks to a number of hacks and tricks that allow recipients to secretly save photos, the service may not be the secure sexting conduit for which users hoped. However, Snapchat’s co-creator, Evan Spiegel has always insisted it was meant for much more than naked photos.

“Everyone said, ‘That is a terrible idea,’’’ Spiegel told The Daily Mail last month. ‘Not only is nobody going to use it, they said, but the only people who do, will use it for sexting.”

Spiegel insists Snapchat can be a vehicle for more wholesome communication. And at Yale, Haufler said the app is being used for just that.

“Most Snapchats I receive are pictures of a friend’s facial expression,” he told The Daily Dot. “In effect, their expression is sending me a specific emotion. By seeing their face, I empathize with them immediately.”

Haufler argues the appeal of the app for college students is manifold. The short lifespan of messages makes them more immediate, he says, simulating the nature of an actual conversation where messages are ephemeral and exist only in that moment. He also said the lack of traditional texting features – like chat histories and mass messaging recipient lists – take some of the social anxiety out of mobile communication.

Still, Haufler says the app is not just for those students who are anxious or socially awkward about what they are sending.

Growth in popularity among the college demographic can only mean good things for Snapchat and its creators—who still work out of Speigel’s father’s house in Los Angeles. It could mean continued success in a battle with a rival knock-off service from Facebook.

The Poke App, introduced late last year, made as big a splash as anything Facebook does, but Snapchat still dominates. In the U.S., it’s the second most popular free photo and video app for iPhone currently – beating out the seemingly ubiquitous Instagram. According to analytics company App Annie, it’s the 19th-most popular free app overall.