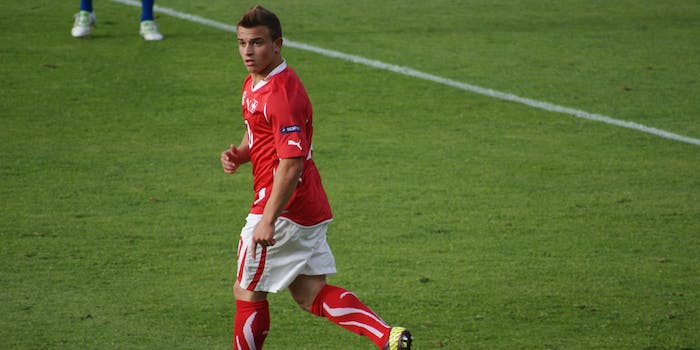 Xherdan Shaqiri is the MVP of the World Cup thus far.

Switzerland entered Wednesday’s must-win World Cup Group E finale against Honduras desperately needing to make up goals. Xherdan Shaqiri answered the call and delivered one of the tournament’s most brute, dazzling individual performances—logging a monster hat trick and sending his country through to the round of 16 in the process.

With respect to Luis Suarez’s hobbled explosion against England, Lionel Messi’s wondrous and steady strikes, and Thomas Muller’s hat trick against a depleted Portugal side, no one has logged a more impressive individual outing.

The Kosovo-born, 22-year-old midfielder from Bundesliga champs Bayern Munich had been starting out wide but was moved to the middle Wednesday and became a controlling monster. The tactical tweak paid big.

Goal one was Shaqiri tucking into the middle from the wing and letting his left foot ride the lightning with pomp.

Goal two was a point blank blink to the bottom-right corner. The kind of reliable bank shot that has Liverpool reportedly throwing cash at Bayern Munich this summer for his services.

Goal three was forceful and just as quick. An ice cream cake topped with another scoop of mint chocolate chip.

Ecuador needed just a 1-0 win to knockout Switzerland entering the day, as the Swiss were cut to ribbons by France 5-2 last week and buried on goal-differential. Yet Ecuador becomes the only South American side not to qualify for the round of 16 at the World Cup after a 0-0 draw with the French.

Switzerland performed with wounded pride, not being aware of the simultaneous proceedings. Until now it had been the most disappointing No. 1 seed in Brazil this side of Spain.

In fact, when the groups were drawn in December, every nation crossed its fingers to be lumped in with the Swiss (Brazil, Spain, Colombia, Uruguay, Argentina, Germany, Belgium were the alternatives). This despite Switzerland’s steady European record, or the fact that it upset eventual winners Spain at the 2010 World Cup 1-0. Most simply saw its high seeding as a side effect of being lumped into a weak qualifying group along with European guppies Norway, Albania, Cyprus, Iceland, and Slovenia, and compiling a 14-game unbeaten streak that padded its FIFA resume.

Switzerland and the “Alpine Messi” faces Argentina in the round of 16 on Tuesday.

Photo by SebStanbury/Flickr (CC BY 2.0)