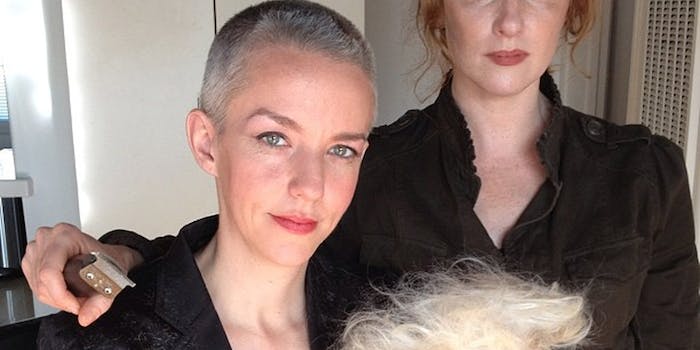 When Boing Boing co-editor Xeni Jardin was diagnosed with breast cancer just over a month ago, she ignored the stigmatizing stereotype that sick people are supposed to suffer in silence. Instead, she has been live-tweeting her entire experience.

She’s still blogging her cancer battle, and today told her Twitter followers: “I start chemotherapy tomorrow. Intravenous thermonuclear war on murderous mutant cells. The force is strong. But, truth here: I am afraid.”

Jardin started preparing for her chemo last week, shaving her head and then posting a photo of  herself with her hair in hand: “Took my hair from chemo before chemo took my hair from me.”

On New Year’s Eve, she laid in a supply of medication to offset the nasty side effects of chemotherapy treatments: “I’ve been drug-free for years. Am now holding a letter that makes it legal for me to use cannabis for chemo symptoms. Life’s interesting.”

She also noted, “Compared to the chemo drugs, all of the pharmaceuticals prescribed to mitigate their side effects, and so on—herb seems the least worrisome.”

It’s been a rough couple of weeks for Jardin, even by cancer-patient standards. Two weeks ago she requested and received her MRI and other medical data from her doctors—or so she thought.

But Jardin—an accomplished technology journalist and commentator who, presumably, is far more tech-savvy than the average American cancer patient—couldn’t figure out how to open and interpret the data on her own. So she turned to crowdsourcing, live-tweeting her attempt to open her medical files in hope that someone would know something she didn’t.

It worked. Jardin opened the files and made a disturbing discovery: her data wasn’t hers after all. “So I figure out how to open my bone scan data. I look. WTF. What’s that dick-shaped ghost-shadow thing—it looks like I have a penis!”

When she’d asked for her medical data, she received some unknown man’s files instead. Over the next couple of hours, as that realization sank in, Jardin posted a series of horrified tweets exploring its disturbing implications: If she has someone else’s data, might someone else have hers? What if doctors had mistakenly used someone else’s data when they concluded Jardin’s cancer had not metastasized to her bones?

Are there any legal implications she should worry about, now that she’s in possession of someone else’s private medical records?

The next day, she tweeted “An update to the #ghostpenis saga. I got an apology. And my correct data. And a promise my data hadn’t been shared with others.”

Meanwhile, there’s always been a certain type of person who, though completely lacking in medical training, nonetheless feels compelled to offer advice to anyone with a medical condition. Turns out a lot of those people follow Jardin on Twitter, and a week after the conclusion of the Ghost Penis saga, she complained that she was “Weary of unsolicited advice on how to cure breast cancer w/o surgery, chemo or rads. And well-meaning amateur sleuths who know why I got it.”

Jardin later rang in the New Year by noting: “I’ve encountered creepy breast cancer trolls since sharing my own story publicly. But benefits of sharing outweigh such gross craplets.”

Currently, Jardin is steeling herself for her first chemo treatment tomorrow. Her Twitter fans suggested she abandon her harsh thermonuclear metaphor in lieu of something more encouraging: “Re IV thermonuclear war: u might also consider a purative, curative transformational view, as well,” said ePatientDave.

Chernynkaya offered this: “A friend if mine said it helped her to think of chemo as dew, which gently renews the arid earth each night. My thoughts are with you!”

PamelaParker suggested a more tech-oriented analogy: “My dad’s leukemia doc compared chemo to a reboot. Kill all cells & hope, when system starts back up, it recovers proper organization.”

Either metaphor applies exceptionally well for Jardin. Her last name means “garden” – and an accomplished computer expert surely knows a thing or two about pulling off a successful reboot.

Correction: An earlier version of this story referred to Jardin’s last name as “chosen.” Jardin considers it her given name.