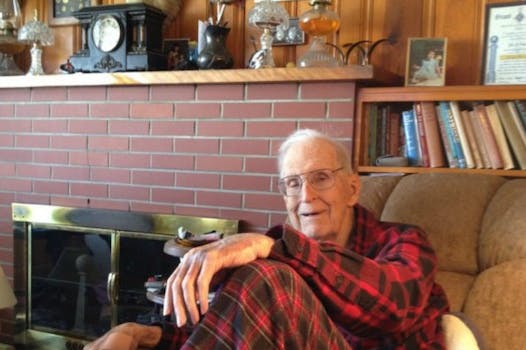 To save her grandfather, Jaclyn Fraley needs money—lots of money—to give to her mother. That's odd, because money isn't an issue in the eviction. It's personal.

The Internet thinks it’s a damn shame that a 91-year-old World War II veteran is being evicted by his own daughter.

So, thanks to his granddaughter, a convoluted story, and and a lot of people who are eager to help, the money is flooding in.

More than a thousand people have donated roughly $25,000 to the man, Jack Potter. The number’s steadily rising. The vast majority of donations have come Friday, when his story went viral; most are small.

Potter’s house, in Zaleski, Ohio (population 278), has enormous sentimental value to him. He said he built it in 1959 with his wife, and the only years of his life he’s lived outside that town were when he was fighting in the Pacific.

To save her grandfather, Jaclyn Fraley says she needs money—lots of money—to give to her mother, Janice Cottrill. That’s odd, because money isn’t an issue in the eviction. It’s personal.

The reason Cottrill wants to evict her own father is a long one. Her husband told local news affiliate NBC4i that she’s angry Potter was withholding visitation rights on her autistic brother, Joe.

According to court documents, Cottrill had power of attorney over Potter and transferred his property to herself in 2004. Potter wasn’t too pleased with that decision, but he didn’t file a legal objection until 2011—meaning he was past the four-year statute of limitations, and thus was out of luck.

As she wrote on her GoFundMe plea:

“While the last thing I want to do is pay my mother any money for the pain and anguish she has caused my grandfather, if it will save his home, I will do anything. If 125,000 people read this and 125,000 people donate simply $1, or just 6,250 people donate $20, I will be able to buy him back his home. Anything raised above the cost of the house will go to paying for in home care and anything else he might need. Any donation you can give helps, please help my grandfather enjoy what time he has left in the home he built, which holds his memories of a full and wonderful life.

She’s even been active on YouTube, recording her grandfather’s gratitude toward those who have donated.

Fraley noted elsewhere that her mother plans to sell the house. She didn’t immediately respond to the Daily Dot’s inquiry whether her mother would actually sell her the house, considering she was reportedly evicting Potter for more personal reasons.

Meanwhile, the money continues to pour in.

Todd Borne was one of the several people who donated while the Daily Dot was composing this story. He gave $5.

“Sad story when the banks are in charge,” he wrote.