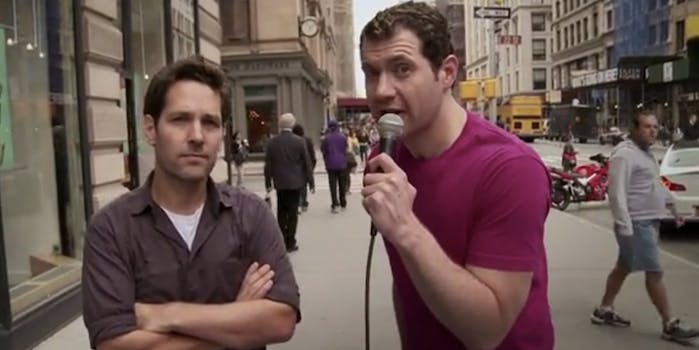 ‘Would You Have Sex With Paul Rudd?’ is America’s favorite new game show

Who are we kidding? Of course you would.

If you answered no, and you came across comedian Billy Eichner and Rudd on the street, you’d be out one dollar. That’s the premise of this lightning round of America’s soon-to-be favorite game show, “Would You Have Sex With Paul Rudd?”

The segment, which aired on Eichner’s Fuse TV series Billy on the Street, is pretty straightforward: Rudd and Eichner ambush strangers on the street, asking if they would have sex with Paul Rudd for a dollar. If they say yes (because come on, the guy was in Clueless, why the hell wouldn’t they), they get a dollar. If they say no, they don’t get a dollar, and get verbally abused by a hilariously frenetic Eichner.

What the segment basically proves is that there are two types of people in the world: those who would have sex with Paul Rudd for a dollar, and those who wouldn’t. And if you fall into the latter category, you’re most likely an old-fashioned wench.

Via FunnyOrDie | Screengrab via billyonthestreettv/YouTube