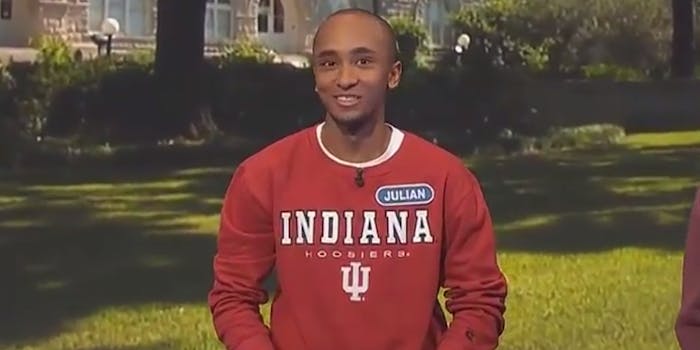 This college student is the worst ‘Wheel of Fortune’ contestant ever

He's so close to winning $1 million, yet so far away.

Even if you guess every letter on Wheel of Fortune, you’re not out of the clear yet: You still have to correctly pronounce the puzzle.

No one has ever butchered such an attempt like this poor lad from Indiana University.

Julian was one (of several) steps closer to winning $1 million on the show recently. All he had to do was say, “Mythological hero Achilles.” Sounds easy, right?

Apparently, Julian has never taken a course in Greek mythology (or anatomy for that matter). He seriously would’ve been better off sneezing mid-word. But it gets worse. Later in the show, with a car miraculously on the line, he whiffs it again—then once more in the final round.

He’s clearly the type of guy that takes nine shots in putt-putt golf.

Of course, this isn’t the first time a contestant has botched a million-dollar opportunity. In late September, Paul Atkinson slipped up when trying to pronounce the tongue-twisting “corner curio cabinet,” an incident that sparked some mild controversy online.

Hopefully it’s not too late to enroll in summer school.