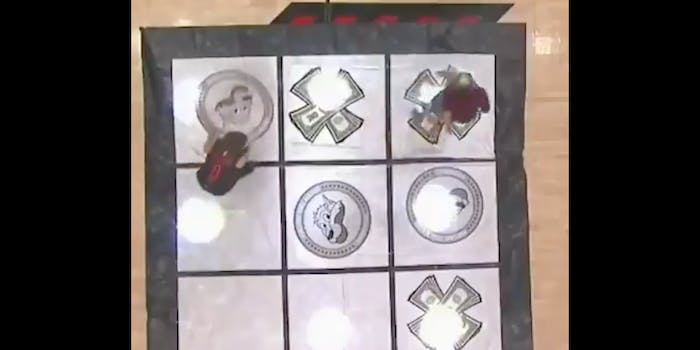 How can anyone be this bad at tic-tac-toe?

This is the worst game of tic-tac-toe ever.

Tic-tac-toe is a solved game. Even children know how to play it perfectly, ensuring they never do worse than a draw. But it wasn’t so easy for two grown women who entered a contest at a Portland Trail Blazers game and ended up playing what’s being called the worst tic-tac-toe game of all time.

To be as fair as possible to these contestants, they did have to make basketball shots before running to the big tic-tac-toe board with their pieces, and they were under time pressure. But that doesn’t excuse this absolute shambles of a performance. There’s never been anything more deserving of “Yakety Sax” background music.

Ladies and Gentlemen: the most maddening game of tic tac toe you will ever watch, set to the tune of Yakety Sax pic.twitter.com/tS8Z9FTv04

If you think the first woman’s struggle to make layups is going to be the worst part of the video, brace yourself. It gets much, much more ridiculous. Not only does she miss an opportunity to block her opponent, she actually tries to cover up her opponent’s piece with her own. (She moves the piece but still fails the block.)

And even after that improbable bit of bungling, the other woman still misses the winning play. This is actually a gift for the audience because we get to see another turn by our superstar first player.

Who misses the block. Again. And tries to cover up her opponent’s piece. Again. Mercifully, the game ends on the next turn.