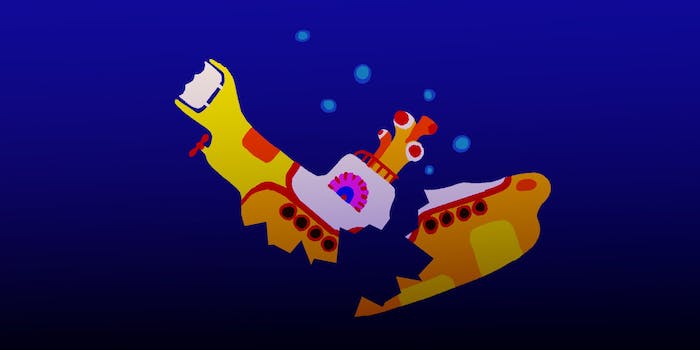 And now, a Spotify playlist of the 20 worst Beatles songs

All of the George Harrison sitar jams? Believe.

One of Western culture’s last sacred cows can hide no longer. More than seven years since the free-streaming pioneers over at Spotify tossed their shovel in the dirt, the entire Beatles discography has landed. Anyone may now access every record, at any point, without paying for it.

Much as Michael Jordan frustratingly eluded ’90s NBA video games, the Fab Four have, until now, hidden behind royalty fees. Every few years, a remastered reissue, repackaged collection, or special edition of Rock Band comes along to keep the brand ticking—they didn’t even hit iTunes until 2010—but almost every move was designed to ensure that listening to the band’s music remained a manual task. As of Christmas Eve, though, any hip millennial can sandwich “Run For Your Life” on a playlist between Passion Pit and Car Seat Headrest—the way God intended.

There will be printed backlash—about cultural appropriation, about John Lennon being an abusive drunk. Someone will write a useless takedown because he’s tired of his timeline’s groupthink. The BBC pointed out on the air this morning that teens in 1965 would have never been expected to identify with cool songs from 1915, so why should today’s be any different?

But this reluctant slide into streaming platforms is a defiant charge against those who would fail to recognize. Here is just about every song from the most popular musical group to ever exist, and good luck saying a word after that back-end Abbey Road suite.

Fetishists no longer have to bootleg homemade revisions, or construct theoretical basement tapes across YouTube. In fact, the mix possibilities are mouth-watering: Take all the riffs they borrowed to go global and pair them with their original black artist; do a mega-clash of Paul versus John songs; pick your 20 favorite, compare and contrast with friends; listen to Sgt. Pepper and Revolver without George’s confounding sitar tracks; take the five pop-oriented records that preceded Rubber Soul‘s high-end songwriting, extrapolate the six genius cuts from each, construct an epic of two-minute rock-and-roll diamonds.

Chuck Klosterman once noted that the Beatles are considered the best band of all time because they wrote all of the best songs. But there was also nonsense. As a toast to the sturdiest corpus in Western pop history, we’ve assembled the worst fucking Beatles playlist imaginable. The drug-fueled sketches, sitar experiments, Ringo jams, Jet’s “Cold Hard Bitch,” solo Lennon and McCartney at their moments of awful hubris, the sanitized, final Beatles single to hit No. 1. All that plus the German version of “I Want To Hold Your Hand” is now, thanks to the Internet age, but a click away.