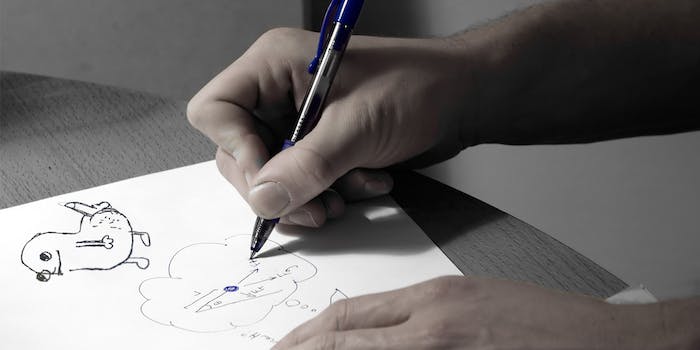 That potato salad Kickstarter may have just lost its throne.

Warning: This article contains explicit material that may be NSFW.

A very nice older British lady once sang, “I dreamed a dream.” Alex Wong, an unemployed recent college graduate from Seattle, dreamed a dream, too: He wants to draw the world’s biggest penis, and he’s taken to Kickstarter to turn this urge into a reality.

As part of what’s either the best or worst crowdfunding campaign since the potato salad Kickstarter (I’m leaning toward best), Wong is asking for $100 to create “the world’s biggest dick drawing.”

In case you didn’t see the first warning: Unless you’re employed at a proctologist’s office or any other penis-friendly workplace, the following video is very NSFW.

So why draw the world’s biggest male genitalia? Here, let Wong explain in his own words:

This is both a personal project rooted in my childhood dreams, as well as a collaborate [sic] project to spread awareness and understanding of our bodies. We didn’t grow up drawing dicks out of nowhere. It was fun, it was funny. It’s still fun and it’s still funny. Whether it is a terrible sketch on a bar napkin or a beautiful painting on a canvas; a dick drawing is a dick drawing.

Seeing an abstract dick by Picasso in a museum is just as funny as drawing one for yourself in the condensation of a car window. Let’s impress Guinness with the World’s Biggest Dick Drawing.

That’s an impressive goal, for sure. But at the moment, the Guinness Book of World Records has no record for the World’s Biggest Dick Drawing, nor does it keep tabs on the world’s largest actual penis. It does, however, have entries for the world’s oldest fossilized penis and the world’s largest animal penis.

The goal of Wong’s Kickstarter is simple: For every dollar that you donate, he’ll add an inch to the dick he’s drawing. When he reaches his $100 goal—or 100-inch goal, as the case may be—he’ll start the dick drawing.

The project prompts more questions than it does answers: What medium will he use? Where will he have the space to complete the nearly nine-foot dick drawing? Will the dick in question be circumcised or uncut? So far, Wong is pretty sketchy on the details. All he says is that he’ll use “high-quality paper” to draw the male member, “wherever a large surface area is available.” (If his poor planning skills are any indication, it’s no wonder he has enough free time on his hands to start a Kickstarter for an 100-inch penis drawing).

We’ve reached out to Wong to get more insight into his artistic process, and will update with whatever response we receive. But judging by what he writes in the “risks and challenges” section he’s not overly concerned with answering these questions.

“There are many risks and challenges when it comes to pioneering something fresh in a tried and true art form, but there’s always room to grow in the genre of dick drawing,” he writes. Picasso, the ultimate dick drawer, couldn’t have put it better himself.

Photo by carbonnyc/flickr  (CC BY 2.0) | Remix by Fernando Alfonso III