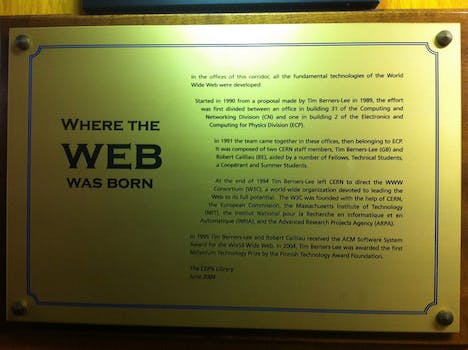 When people say April 30 is the birthday of the World Wide Web, here's what they mean.

Though it’s not the World Wide Webs’s actual birthday—sorry, ThinkGeek!—today marks a very significant milestone in Web history: 20 years ago today, the Web became part of the public domain.

But before we get into the importance of the date, a little background.

In March 1989, computer scientist Sir Tim Berners-Lee wrote “Information Management: A Proposal” while working for the European Organization for Nuclear Research (CERN). In this document, Sir Berners-Lee proposed building a “distributed information management system” connected to the Internet—which just celebrated its 30th birthday earlier this year—that would allow physicists from across the world to share data with each other.

This paper became the foundation of what we now know as the Web. Within two years after writing his proposal, Berners-Lee developed its three essential components: the Hypertext Transfer Protocol, a markup language for it (HTML), and web addresses (uniform resource locators, or URLs). He also developed the first browser, originally named the WorldWideWeb but later changed to Nexus to avoid any confusion between it and what Berners-Lee dubbed “the abstract information space.”

The Web’s proliferation was largely confined to the scientific community. Its growth was also limited by the fact that there were other services similar to it, the most prominent being the Gopher Protocol.

But then 1993 came around, bringing with it a series of fortunate events for Sir Berners-Lee’s invention.

The first was the February release of the Mosaic, the browser often credited for popularizing the Web.

That was followed by the University of Minnesota announcing that they would begin to charge a licensing fee for Gopher. That decision forced early adopters to find an alternative service.

Finally, on April 30, CERN issued a statement announcing that it was waiving all intellectual property rights of the World Wide Web, making it free for anyone to use.

“CERN’s intention in this is to further compatibility, common practices, and standards in networking and computer supported collaboration,” the announcement read.

“CERN relinquishes all intellectual property rights to this code, both source and binary form and permission is granted for anyone to use, duplicate, modify and redistribute it.”

In the mind of Sir Berners-Lee, who now heads the W3 Consortium, this document was a game changer.

“I knew that none of the people I was talking to would have been involved at all if they had thought that they were buying into some commercially controlled product,” he stated in a video released on  the 10-year anniversary of the declaration.

“If we had not had that document from CERN, there is no Web.”

“Without this commitment,” he continued in a press release, “the enormous individual and corporate investment in Web technology simply would never have happened, and we wouldn’t have the Web today.”

A lot has changed in those 20 years. According to CERN, the Web was responsible for 1 percent of all Internet traffic in 1993. In 2013, analysts predict that the 1 billion web pages threshold will be passed.

To celebrate this historic day, Cern has restored the earliest copy it could find of the world’s first website to its original URL at http://info.cern.ch/hypertext/WWW/TheProject.html. Although it was first launched in 1991, this version of the site dates from 1992.

We’ve come a long way since this was the only thing on the Web!