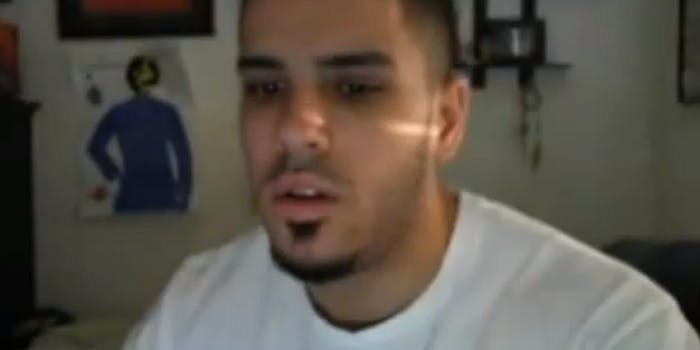 World of Warcraft player forgets to turn off webcam before sex

Murdaralph will never forget to shut down his webcam after a livestream again.

Here’s some sound advice: if you’re doing a livestreaming session of a video game, make sure you turn off your camera once you’re done.

World of Warcraft player murdaralph learned that lesson the hard way after footage of him having sex with his girlfriend leaked online.

Murdaralph was livestreaming a game of World of Warcraft: Mists of Pandaria—the fourth expansion set of the popular massively multiplayer online role-playing game—on gamer-oriented video platform Twitch.TV. He unintentionally left his camera on after his game, and it captured his girlfriend entering the room and proceeding to have sex with him.

It wasn’t until the next day that the gamer realized what had transpired. Upon discovering what happened, murdaralph let out a very audible “oh no!” before finally turning off his camera. You can watch the reaction in a video entitled “DUN GOOFED,” uploaded to YouTube by murdaralph himself and posted below.

The original video—the one showing the fornicating couple—is no longer available, and murdaralph’s channel on Twitch has been shut down due to its violation of the site’s terms of service. However, evidence of the unfortunate— and hilarious— incident still lives online. At least two separate threads have appeared on the Reddit subcategory r/gaming.

The first contains a direct link to the since-deleted video, while a second, far more popular thread includes a screengrab of the couple lying naked in bed. As of this writing, the post has reached the front page of r/gaming and garnered hundreds of comments, many of them rightfully ridiculing murdaralph for his oversight.