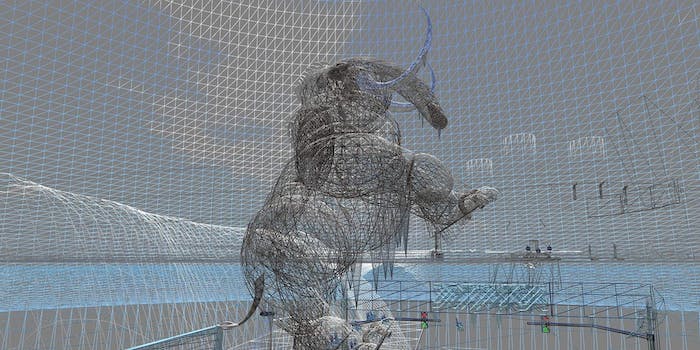 I want a pet huia. Seriously, have you seen these things? Little black birds with bright orange cheeks, and the females have gorgeous curved beaks: long and slender and ivory-white. Their song is haunting, flutelike, and melodious. According to the “Handbook of Australian, New Zealand and Antarctic Birds,” baby huia chicks will “peep” back at you if you talk to them. Awww. How could anyone not want a pet huia?

Unfortunately, they have been extinct since about 1920. There was no one thing that caused it. The huia were not widely adapted: According to fossil records they only ever inhabited one island, the North Island of New Zealand. They were terrible at flying and preferred to hop along the ground. As land-roving predators like rats and dogs migrated to the island, the huia became easy and obvious victims. Having evolved in isolation, they were vulnerable to new diseases as well.

Humans also played a role. The huia were hunted for their plumage and pretty beaks. But even if the feeble hunting laws meant to protect the huia had been enforced properly (which they were not), in the end it would have made no difference. Huias live almost exclusively off of bugs found in rotting wood, and so they can only survive in old forests that have large decaying trees. As forest land was cleared to make way for farms, the natural habitat for the huia, already limited to a single island, shrank even further. Eventually, there simply was not enough habitat to support a self-sustaining population, and their numbers collapsed.

We have to ask: What would the end result be?

In 1999, an enthusiastic project was launched, spearheaded by a bright-eyed group of New Zealand high school students, to try to clone the bird back into existence. The idea was to take DNA from the preserved skins of dead huia in museums, and inject or recreate that DNA in a viable bird’s egg. Nothing has come of that project, and according to Dr. David Lambert, Professor of Evolutionary Biology at Griffith University, it is unlikely that anything ever will: “DNA preserved in museum specimens is just not good enough to extract the entire genome.”

But suppose the New Zealanders had found enough intact DNA to create a new huia. We have to ask: What would the end result be? Surely that’s an awfully expensive project just to give me a cute pet that goes “peep peep” when I talk to it?

Environmentalists often try to justify the idea of de-extinction (the fancy term coined for bringing back species that have died out) on the grounds that they are concerned with biodiversity. Humans have recklessly killed off animals at an enormous pace, leaving big holes in the interconnected web of the ecosystem. Who knows what slow-acting and hidden damage we may have done? By bringing some of these species back, perhaps we can “fill in the gaps” in our biosphere, which in turn might lead to a healthier earth overall.

This rationale contains too many phrases such as “perhaps,” “might,” and “who knows” for the liking of most scientists. Scientists who are actually concerned about biodiversity and extinction frequently rail against the idea of de-extinction. To them, de-extinction is one of those “sexy” ideas that is doomed to failure, and they worry that time, intellectual capital, and money could all be better spent elsewhere.

Dr. Stuart Pimm of Duke University worries that even just the fantasy of bringing back extinct species—still a matter that is far off in the future in practical terms—will make politicians lackadaisical about environment conservation. What good is bringing back a species if its environment is still destroyed? The huia is a good illustration of this problem. Re-introducing the huia into the New Zealand biosphere isn’t as simple as creating a loving huia couple (they do mate for life, after all) and setting them free into the wilderness of North Island. Honestly, there just isn’t much wilderness left, and without it, they would simply go extinct again.

Another problem is that nobody knows how many huias we would need for them to sustain their population in the wild. The question hasn’t been explored with huia, but it has been researched with carrier pigeons. According to “Incredible Technology: How to Bring Extinct Animals Back to Life” by Tanya Lewis, the “passenger pigeon was a very social bird known to form flocks of millions. When their numbers dwindled to a few thousand, the birds stopped breeding.” Dr. David Ehrenfeld, a biologist at Rutgers University, has pointed out that if de-extinction methods only produce a handful of birds, we couldn’t even be sure that they would reproduce at all.

Re-introducing species into an environment where they have disappeared is extremely hard. We have tried to do it with endangered species, and it has failed over and over again. Animals that were not born in the wild are usually bad at surviving in the wild, and the conditions that lead to them being endangered in the first place—whether pollution or hunting or anything else—usually still persist when they are re-introduced.

Ultimately, all of this is why Dr. Paul Ehrlich, Professor of Population Studies in the Department of Biological Sciences at Stanford University, has called de-extinction “a fascinating but dumb idea.” He, along with many others, has said that anyone who is sincerely concerned about biodiversity would better spend their time focusing on keeping plastics and pollutants out of the environment, stopping mineral exploration, trying to suppress the ivory trade, pushing reduction of meat eating, and a million other things that could be done right now to slow the bleed of species that are going extinct every year.

Given the state of the environment, there is almost no chance that the huia would ever be able to exist in the wild again. Having a pet huia in my home, on the other hand, eating bugs and larvae purchased at a pet supply store, will do nothing to help the earth’s ecosystem. Neither will having a few dozen huia in a zoo. So we have to ask: What is the point behind of the incredible expense involved in resurrecting the huia, again?

That’s right: Because science. And because it’s cool.

The mystique of the woolly mammoth

Huias are cute, but they are nothing compared to the allure of woolly mammoths. Whenever researchers involved in de-extinction want to grab headlines, they always talk about these media darlings. Just yesterday two new stories broke on the Internet about different teams of researchers trying to resurrect our long-lost woolly friends: one article about George Church’s team at Harvard, who have found a way to insert woolly mammoth genes into elephant DNA, and a second about South Korean researcher Hwang Woo-suk, who is tenaciously drilling woolly mammoth bones in Siberia, hoping to score a fully intact strand of authentic woolly mammoth DNA.

it will be awesome when we have them again http://t.co/cHtleiPVEf

These are only the most recent examples in a long trail of woolly mammoth resurrection articles that have been published in recent years. Ever since a gigantic image of a woolly mammoth graced the cover of the April 2013 issue of National Geographic, next to the headline “Reviving Extinct Species,” our big woolly friends have captured the public’s imagination.

From the scientists’ point of view, there are some practical reasons to focus on the woolly mammoth. They are similar to elephants, which makes reconstructing DNA strands easier. Russian ecologist Sergey Zimov also hopes that re-introducing the woolly mammoth to Siberia could improve the ecosystem there.

But other extinct animals could also be chosen that fulfill these requirements. No, in the end, people love woolly mammoths because they are cool. They are huge, they evoke both the draw and the fear of an ancient time in human history, and besides all of that, they have “woolly” in the name. How can anyone not love a story that involves woolly mammoths?

Unfortunately, all of the objections scientists have to resurrecting the wee little huia are also present, and arguably magnified, when we talk about the woolly mammoth. The problems are not technical ones: Scientists are all very optimistic about our technology progressing to the point where it’s possible. The concern on the minds of all of the critics in the scientific community is: But why?

The concern on the minds of all of the critics in the scientific community is: But why?

“It’s just really cool,” was the blunt and honest assessment from Hank Greely, a leading bioethicist at Stanford University, when talking to BBC News in 2013. In “Comeback of the Woolly Mammoth: Bringing Back an Extinct Species,” Jyoti Poojary talked about species-revival as some kind of redemption: justice for those species that have been killed off by human negligence and waste over the centuries.

There you have the real answer. Biodiversity isn’t the motivating factor behind reviving the woolly mammoth. Not really. Of all of the possible things we could be doing to save the great biological network of our Mother Earth, reviving the woolly mammoth is the most expensive, most fraught with risk, least likely to work, and all-around dumbest “solution” we could possibly explore. The media has spent years circling around the questions of “can we” and “should we” when considering de-extinction, and the consensus is in: We can, but it would be pointless. Awesome, but pointless.

But if you know anything about human nature, that can lead to only one conclusion: We are absolutely going to do it. The only thing we can do next is move beyond endless rounds of asking “should we” and instead start planning a little better for how we will deal with these animals when they inevitably get here. Perhaps some actual environmental conservation would be a good start.