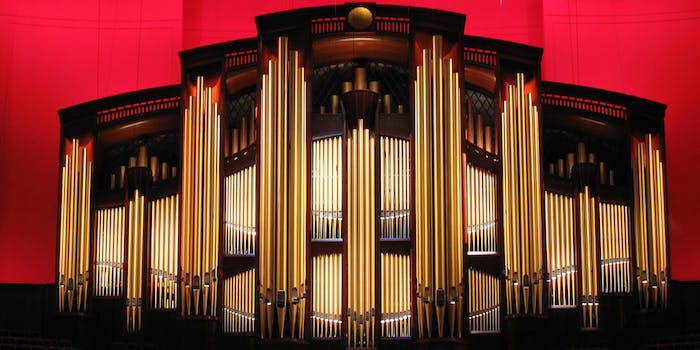 Women can change the Mormon church by leaving it

There's never been a better time to GTFO.

On Monday, the Church of Jesus Christ of Latter-Day Saints (also known as the Mormon Church) excommunicated Kate Kelly, the founder and leader of Ordain Women, a group that campaigns for women to be admitted into the all-male Mormon ministry. The only way that Kate Kelly will be readmitted into the Mormon Church is to discontinue her work with Ordain Women and demonstrate “true repentance.”

While the efforts of Ordain Women are noble in intent, the most powerful statement that feminist Mormons can make against the Church’s patriarchal culture is to abandon it altogether. Some institutions are pliable to change and social pressure; others rigidly adhere to exclusionary practices in the face of cultural upheaval. Mormonism has proved time and again that it belongs in the latter category.

For example, Kate Kelly isn’t the first high-profile feminist activist to be excommunicated by the Mormon Church. Back in 1979, Sonia Johnson was excommunicated for her work in support of the Equal Rights Amendment. Johnson founded a group called Mormons for ERA, an unlikely group of feminist advocates in the midst of a conservative church that quickly garnered national media attention for its unusual cultural location. Mormon Church leaders bristled at the thought of their church being associated with the ideology of the ERA.

Unlike Kelly, Johnson made the choice to attend her disciplinary trial and was, as she reports in her memoir, excommunicated as a sort of warning shot for any future feminist Mormon leaders. Twenty-five years later, with the case of Kate Kelly, the Mormon Church has essentially said, “We weren’t kidding with Sonia.”

If the Church has not tolerated outspoken feminism within its walls for twenty-five years, the efforts of organizations like Ordain Women would seem futile. Top Mormon leaders are playing a long game in which they hold all the cards. If the Church doesn’t value its female members as anything other than wives, mothers, and homemakers, then the only way women can regain meaningful power over the Church is to remove themselves from its ranks.

Remaining within the Mormon Church also shows tacit support for its other exclusionary practices. While the Church does not prohibit interracial marriages, it still counsels its members against entering into them. In fact, a Mormon lesson manual still uses the following quote from Spencer W. Kimball: “We recommend that people marry those who are of the same racial background generally and of somewhat the same economic and social and educational background (some of those are not an absolute necessity, but preferred.)” 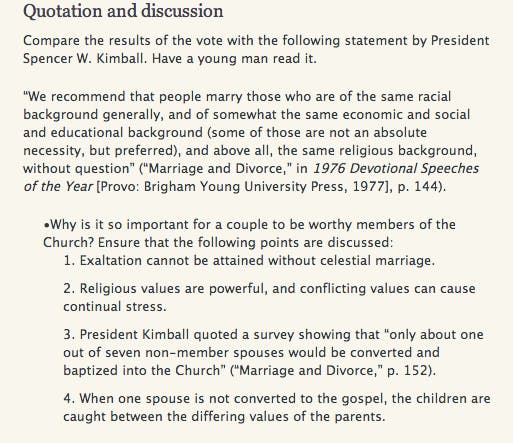 The Church also places restrictions on transgender membership and leadership. As the Mormon Church handbook notes, “members who have undergone an elective transsexual operation may not receive the priesthood.” Non-members who have had a transgender surgery cannot be baptized without special permission from the top leadership of the Church and, even then, they cannot receive any of the higher ordinances of the Church.

And, while the Mormon Church has grown slightly more tolerant of its gay, lesbian, and bisexual members, it still prohibits same-sex relationships and marriages. The Church officially advises any of its members with exclusive same-sex attraction to remain celibate.

But the Church is not content to enforce homophobic policies within its own sphere of influence, it also seeks to enforce anti-gay legislation on non-members too. Millions of dollars donated by Mormons “tipped the scales” in the 2008 effort (Prop 8) to prohibit same-sex marriage in California.

When faced with a monolithic institution that is vehemently attached to transphobic, homophobic, racist, and misogynist policies, the best thing to do is deflate its power by decreasing its membership. Campaigning for change along one axis of oppression will still leave the overall bigotry that defines the Church untouched. Sometimes a social system is too broken to change it from within. You can’t revitalize a rotten apple and Mormonism is rotten to its core.

Furthermore, leaving the Church in droves will put more pressure on it to change than simply pleading for glacial change that will not happen in any of our lifetimes. In the era of the Internet and digital media, the world will not be able to ignore a mass exodus from the Mormon Church. Quietly subjecting oneself to Church discipline allows Church leaders to maintain a low profile; leaving the Church en masse makes a statement that can’t be ignored.

I left the Mormon Church in 2007 and resigned in 2008 for an array of reasons. I was disillusioned with its doctrine, I learned new information that contradicted its historical claims, and, most importantly, my queerness and my feminism could not find full expression within an institution that discourages both.

Many of my friends and family members, on the other hand, opted to stay, to embrace aspects of its culture while working for change from within. Over the last seven years, I have watched as my loved ones have been slowly pushed out of the Church. One left only after being threatened with Church discipline. Another remained in the Church for seven years before finally realizing her feminism would never be congruent with Church doctrine.

What happened to Kate Kelly is a tragedy, yet another death knell for the possibility of Mormon feminism. With Kelly’s excommunication the Church has sent a message loud and clear: “Get in line or get out.” There’s never been a better time to get out.

Photo via Sushkins/Flickr (CC BY 2.0)