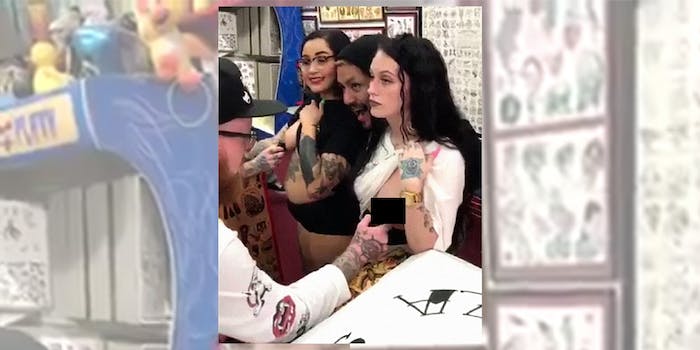 This woman took a taser to the nipple and barely flinched

Meet your new idol. This woman is tough.

“Don’t tase me, bro!” has been an iconic catchphrase since the 2008 election campaign, and for good reason. When hit with a taser, most of us would flop to the ground and convulse. It’s not a pleasant experience. But one woman doesn’t really give a f**k. She can take a taser directly to the nipple with no fear at all.

Her incredible toughness and self-control has made her beloved on Twitter, with both men and women offering to marry her or saying they want to be like her.

Im fuckin in love witn you marry me

How I went from reading the caption to watching her get tased to not seeing a single fucking emotion on her face pic.twitter.com/nCfUfQzIvN

In case you think this was somehow faked, a friend of hers tried the same thing and did not hold still. “Oh my god, Sam’s tough!” she shrieked.

Sam is tough, and she’s also extremely funny. Since her video blew up, she’s been on Twitter responding to people who said she was on drugs during the taser incident or claimed she was “dead inside.” Drugs? No. Dead inside? Maybe.

Me: I'm dead inside. I feel nothing.
Friends: prove it
Me: https://t.co/G4oyOEHZue

She also had a message for men talking trash about her on Reddit.

Oh, and Sam can be tased in a handstand, too, without falling over.