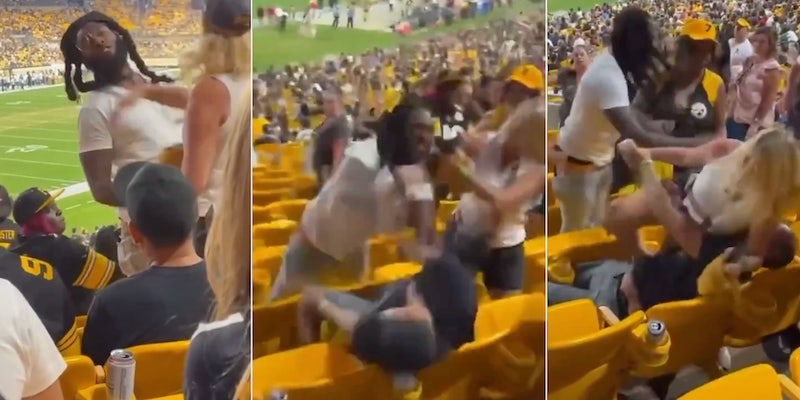 The woman's husband attempted to join in but got knocked out in the process.

A scuffle at last night’s matchup between the Pittsburgh Steelers and Detroit Lions has gone viral, racking up 42 million views in a single day.

The video, taking place at Heinz Field, shows a woman and a man engaged in a verbal altercation in the middle of the game. It’s unclear what started the exchange. The woman tells the man to “get the fuck out” and appears to swing her arm toward him. He grabs it before she makes contact, telling her not to touch him. Then, she slaps the man in the face and all hell breaks loose.

The man starts to defend himself from the woman when another man, presumed to be the woman’s husband, jumps in. The man then begins to fight with the couple, knocking out the husband at one point. The husband comes to while a stadium official arrives to break up the fight. The woman can be heard saying something inaudible, while bystanders shout in defense of the first man, “She slapped him in his face. She hit him first.”

Viewers of the video online had less than sympathetic words for the couple.

Others pointed out that it seemed unfair that the stadium officials seemed to escort the man, who is Black, out despite the woman, who is white, being the apparent instigator.

It’s unclear what happened or who was kicked out after the altercation occurred.

Update 10:10 am CT Aug. 23: In a statement to the Daily Dot, Steelers spokesman Burt Lauten said:

“Heinz Field Management is aware of the video of an incident from last night’s game at Heinz Field. We are working with local authorities and Heinz Field staff to gather more information and identify the individuals involved. This kind of conduct is inexcusable, and we will respond accordingly once more information is obtained.”