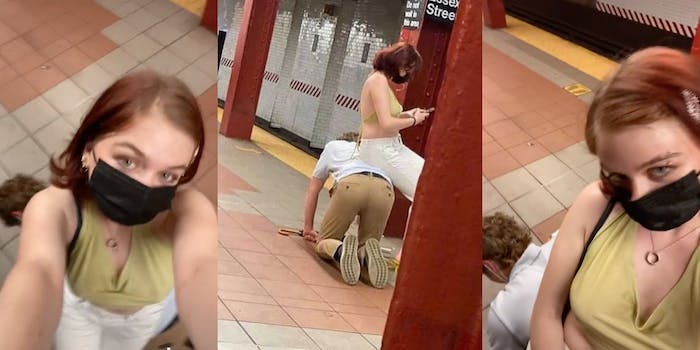 'I don't know whether to find this humiliating or sweet.'

A viral photo of a man on all fours in a subway station with a woman using his back as a chair was posted Friday by @subwaycreatures. The post was captioned with, “And they say chivalry is dead.”

TikToker @sti1es, who appears to be the woman from the viral photo, posted a video on Saturday of her human seat in real time. “[T]his summer’s must have accessory is boy chair,” she captions.

Holding her camera above herself, @sti1es playfully shows various angles of her seated atop a man on his hands and knees.

This unusual seating arrangement sparked Instagram and TikTok conversations about the nature of the human chair gesture and the pair’s relationship.

Many fellow grammers agreed, like @justfroggy_slp who wrote, “Ummmm not chivalry. Im pretty sure she walks him on a leash lots of the time.”

Others had more mixed reactions, with a few expressing sympathy toward the boyfriend.

“I don’t know whether to find this humiliating or sweet,” @discoreverie said.

Yet the woman was also hailed a hero by others like Instagram user @labella.roxy.001 who asked, “Can she write a book?”

More admiration followed when Instagram user @sti.les commented, “hey that’s me.” Replying to her, @pulchritudelove wrote, “LMFAOOOO officially a legend, not that u weren’t already.”

The Daily Dot reached out to @sti1es via TikTok for comment but did not immediately hear back. Subway Creatures declined to comment for this story.