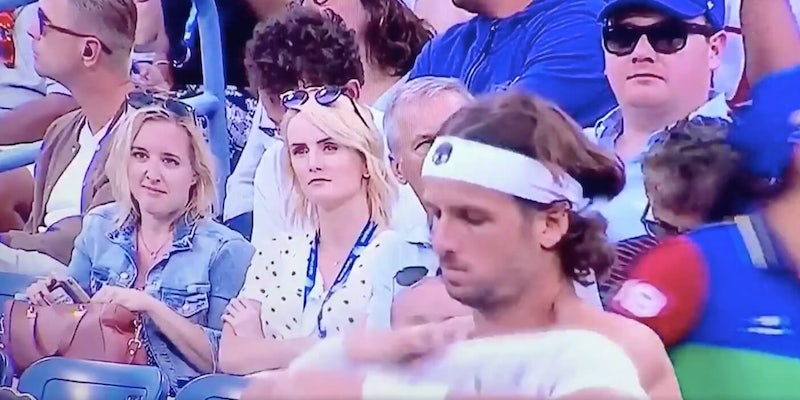 'All hell would have broke loose if it was the other way round.'

It’s only day two of the U.S. Open, and things are already heating up.

Aside from Serena Williams absolutely destroying Maria Sharapova in under two hours, a mysterious blonde woman has been making waves on the internet.

The woman, who has yet to be publicly identified, was attending a match between Spanish player Feliciano López and American player Taylor Fritz on Monday. During a break, López decided to take some time to change out his sweaty shirt. The woman, who was sitting a few rows behind López, took that opportunity to take out her phone and snap some pics of a shirtless López.

Of course, her reaction was caught on camera, and the moment went viral after a tennis fan account shared the video on Twitter.

“Blonde woman, top left. She is all of us,” the tweet read.

But her actions have divided Twitter. Some laughed along with the blonde woman.

“Get that boomerang, sis,” one person wrote.

While others found her actions to be uncomfortable, claiming the positive response she is receiving is a double standard. Many men are saying that if the roles had been reversed–a man taking photos of a shirtless female tennis player–people would have deemed it creepy.

“All hell would have broke loose if it was the other way round,” Twitter user @HenriAshwell09 wrote.

Others brought up the fact that men actually do this to women, and oftentimes their motives are far more sinister.

Twitter user @PsychOutWXNA noted out that the roles could not possibly be reversed in this scenario because female tennis players are not allowed to change their shirts on courts like men are.

“There’s a double standard here that doesn’t allow women to swap out shirts like the men,” they wrote.

I can’t imagine. There’s a double standard here that doesn’t allow women to swap out shirts like the men. Add in societal power dynamics and your whole imaginative scenario just disappears.

No word on if López has been made aware of the video, but as he did win the match over Fritz, he’s probably too busy preparing for round two of the Open.

Either way, the most shocking thing about this situation is that it’s been over 24 hours and Twitter has yet to find this woman.