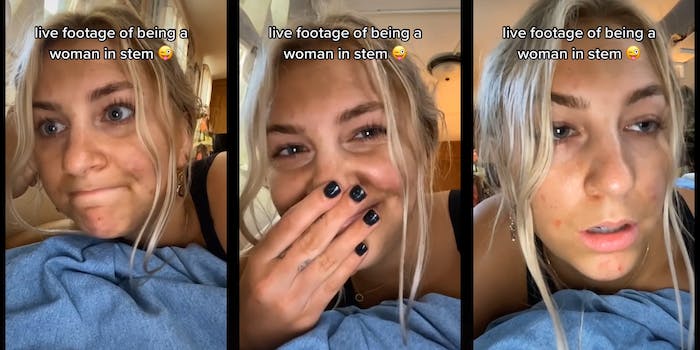 The student captured what happens to women's 'input.'

McDonnell, a science and finance grad student at the University of Iowa, according to BuzzFeed, documented a series of interruptions from male classmates on TikTok. The incident happened on a video call, which gave McDonnell more room for eye rolls and other reactions women often have to stifle in person. The caption: “live footage of being a woman in stem.”

Women in STEM—science, technology, engineering, and math—often experience bias and sexism in their respective fields. McDonnell, who is reportedly one of four women in the grad program, told BuzzFeed that the call was regarding a commercial underwriting project, but that this kind of thing “happens on a daily basis.” She added that, “Some of us girls have the top standings in the program, and no matter how experienced we are, none of the men seem to take us seriously.”

The comments on the video are largely supportive, with people urging her to call this behavior out, or to just keep talking. “As a woman in STEM…. I’m HEATED but not surprised,” said one commenter. “Rage” was also a recurring feeling.

McDonnell tells the Daily Dot she’s received “thousands of comments and messages” from women relating their own experiences and highlighting a “lack of respect from men in their fields.” She posted a follow-up video, noting that she’s also gotten backlash from people “invalidating” her experience, or saying she’s “exaggerating” what happened.

“I am not surprised so many women have had similar experiences,” she tells the Daily Dot, “but it shows that we need a lot of change.”