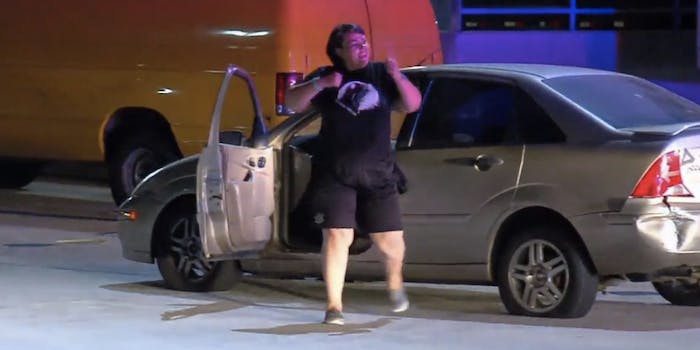 Where ya at, woman of my dreams?

I saw you Wednesday night in downtown L.A. It was around East 8th Street, and your gold Ford Fusion had been stopped by the police. You were wearing a black T-shirt and black shorts. There was a magic glow about you, though, as the blue and red lights bounced off your skin. I feel like you’re the type of person who won’t get bogged down by a sticky situation—even as your car sat useless there, tires shorn from spikes on the road, you danced to Future (feat. Drake) and celebrated your free spirit.

I was too far away to say anything to you, and you were whisked away too quickly. Maybe you noticed me—I was in the sky, shining the spotlight on you from my propeller-powered perch. If only they had let me hold the megaphone for once, I could have shouted my digits your way.

On the off-chance you see this, I want you to know that you didn’t just allegedly steal a car Wednesday night. You also stole my heart.