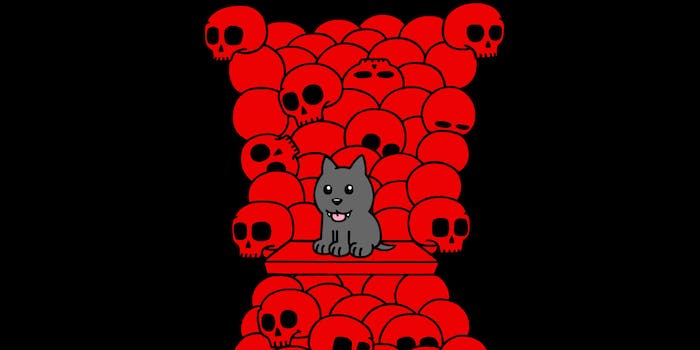 In the den with @wolfpupy, Twitter’s misunderstood canine cartoonist

In Twitter’s animal kingdom, there is no creature like @wolfpupy.

In Twitter’s animal kingdom, there is no creature more unexpected or misunderstood than @wolfpupy. It’s a four-and-half-year-old account, run by a self-described 5-month-old canine who lives in a cave. After a cursory look, you wouldn’t know whether to laugh, scratch the wolf’s head, or squint in confusion.

This is what makes @wolfpupy and Twitter a perfect comedic pair.

a lot of people say to me, things, but i am to busy brushing my hair and being a beautiful model. thats what life is all about

“I have a lot of thoughts in my head and one day I started writing them into Twitter,” @wolfpupy said in an email interview, never once breaking character. “Most of the time the thoughts are just things i think of to make myself laugh when things are bad for me. I am only writing this stuff into the website to entertain myself and make myself laugh, so if anyone else finds it worth reading it is beyond me.”

@wolfpupy’s Twitter account has amassed a cult following. It’s made a few curated top-tweet lists (here and here, for example) and has amassed more than 133,000 followers. One of those followers includes Pauly Casillas, the Twitter parody account trailblazer who runs @notgarybusey, @notjaycutler, and @bestworstadvice. This tweet from July was what inspired Casillas to follow @wolfpupy.

perhaps the bullys were right, maybe i should stop hitting myself

To Casillas, @wolfpupy has achieved his level of success partly thanks to that loose amalgamation of off-kilter comedians known as Weird Twitter.

“@WolfPupy was one of those accounts that thrived in that [Weird Twitter] structure,” Casillas said. “A lot of it has to do with the avatar or profile pic you chose to use. It seems like people associate the joke with picture on a subconscious level. I don’t know if some of the jokes @wolfpupy writes on Twitter would have the same effect if it wasn’t attached to a cartoon picture of a wolf puppy. They’re good jokes, don’t get me wrong, but when you imagine a baby wolf saying those types of things, they hit harder.”

Aside from @wolfpupy’s Twitter prowess, he is also a budding comic artist whose illustrations are just as whimsical, self-deprecating, and painfully cute.

We interviewed @wolfpupy for this story, but his responses were so beautiful that we had to run them in full. Here’s our conversation, discussing his comedic inspiration, Weird Twitter, and The Walking Dead.

Tell me about your place in the animal kingdom and your family background.

Family gone away but in a dark cave darkness is the only family you ever need because when you can’t see anything there are no problems. Sunlight is a plague on this earth and the sun should be removed from the sky and replaced with the moon for all hours in my opinion. My place in this world is in a cave or a hole dug in the ground doing what I want to do.

I have a long list of enemies but my main enemies are golden eagles and bears. My biggest strength is probably my sharp teeth I got after my milk teeth fell out. My weaknesses? I don’t handle being shot with a gun or being set on fire very well.

What does a wolfpupy do everyday?

Mainly just living in a dirt cave, drinking milk, and sleeping. Sometimes I go out hunting for meat.

Lots of cool things to do in a cave like practicing howling, drawing pictures, or writing stuff.

“Most of the people who are in that group don’t like me at all.”

You are often categorized as being part of Weird Twitter. How do you feel about that?

I dont think I fit into that group to be honest. Most of the people who are in that group don’t like me at all. If I had to put a label on my writing it would be “dumb” not “weird.” I am never aiming for “weird” with what I do.

You have a decent amount of verified accounts/celebs following you. Is there anyone of these who you you found yourself saying, “Why the heck are they following me?”

It is really cool having a lot of my favourite musicians and artists following me, interacting with them never really seems real. The Internet is like an alternate reality to me where you can talk to whoever you want. They can only ignore you or respond, who cares, nothing matters.

If you could be anything other than a wolfpupy, what would that be?

I was thinking of getting one of those android bodies like Krang has and being a normal person for a while.

Is there a real life comedian you are inspired by?

I don’t really see myself as a comedian but yeah, I have listened to everything I could find of Mitch Hedberg’s material, one of the funniest people to exist. I wish he was still alive, I wish a lot of people were still alive. I read a lot of John Swartzwelder and Jack Handey stuff, definitely two of the best and funniest writers to me. My favorite webcomic is Super Mega Comics. I’ve read the entire archive of it at least eight times.

The Walking Dead is coming back next month. Any thoughts on the show?

I don’t watch that show, but I’m sure the dead on there will be having such a walking around in it for sure.

What do you hope people feel or do after seeing your comics?

Laugh hopefully, if not theres nothing I can do about it. Maybe they laugh so much they decide to send me hundreds of dollars, that would be cool.

Is there a particular comic you’re proud of and why?

This one because it is pretty close to what I had a vision of in my head. My drawing skills aren’t good, so when I actually manage to get something close to what I imagined, it’s nice for me. 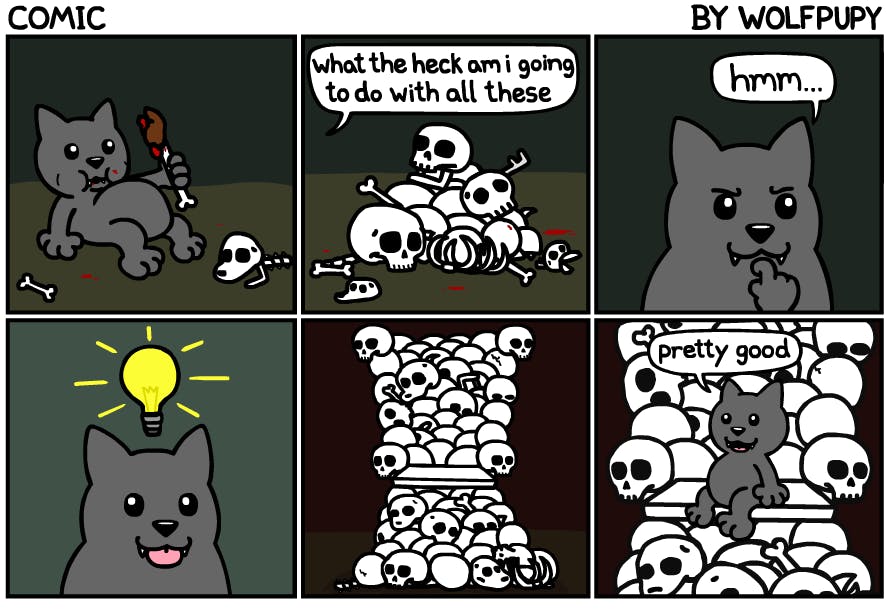 Aside from cave dwelling, anything else on the horizon?

In the future I will be working on a wolfpupy video game with some of my friends. It should be very cool so I am excited for it and I hope people will check it out.