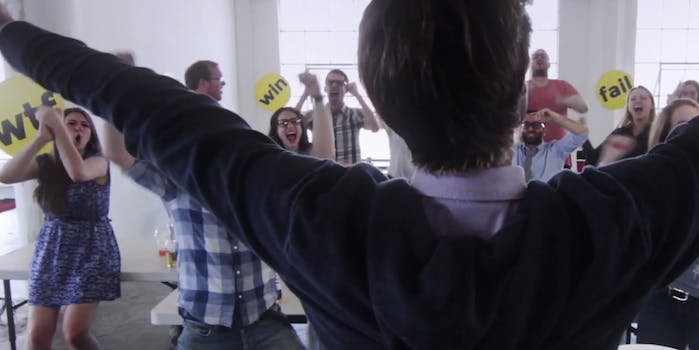 ‘The Wolf of BuzzFeed’: Coming soon to a laptop near you

This might be the best Wolf of Wall Street parody we’ve seen yet.

For many people who disliked Martin Scorsese’s supremely depraved The Wolf of Wall Street, the problem came down to whether the film was an endorsement of the lifestyle it depicted. (Spoiler: It’s not.) But there can be no ambiguity about this official trailer for The Wolf of BuzzFeed, a tale of one man’s ruthless quest to hack our minds with GIFs and listicles.

That guy is BuzzFeed CEO and founder Jonah Peretti. Parody Jonah is joined by a dude who does an alarmingly good Jonah Hill impression, and soon enough, a strategy of culling clickbait material from other websites nets the burgeoning business millions of meaningless pageviews, Facebook shares, and LOLs.

“Was any of this interesting?” Fake Peretti asks. “Absolutely not.”

In real life, Peretti has already endorsed—via a tweet—the Half Day Today! video, despite its cynical take on his new-media empire.