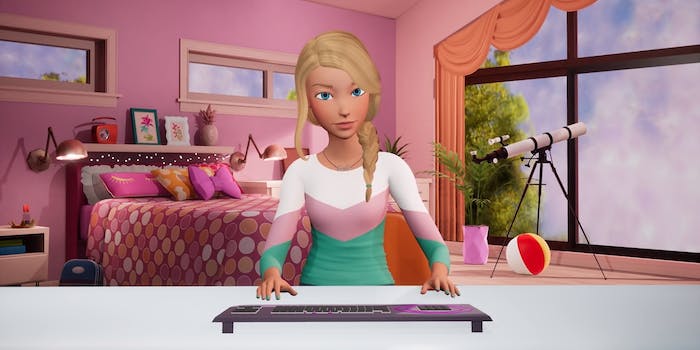 Need some helpful advice on living your best life? Watch Barbie’s Vlogs. Yes, that Barbie. Lately, social media has been ablaze with a surprisingly woke clip of Barbie sitting at her desk discussing the word “sorry,” how much we—especially women—tend to lean on it, and how easy it is to start saying it as a reflex.

“I have some ideas about sorry,” Barbie says. “I think there’s a bigger issue around ‘sorry’, especially with girls. We say it a lot. Like, a lot. Like it’s a reflex, and that somehow everything that goes wrong is our fault.”

She goes on to discuss the various situations in which people tend to use the word, such as asking a waiter at a restaurant to reheat your food, or when getting excited and animated about something. It’s a word that many women, particularly young girls, have struggled to stop using. Many of us, myself included, have had difficulty with apologizing when it simply isn’t needed. And if it takes Barbie to help us understand that, so be it.

“Sorry is a learned reflex, and every time we do it, we take away from our self-confidence,” concludes Barbie, before offering some helpful alternatives to just saying sorry all the time.

Who knew that Barbie’s videos on YouTube were actually really great and offered a treasure trove of unexpectedly useful advice for young women?

*Watches the Barbie vlog on the "Sorry reflex"*
Me: WHELP, time for me to start stanning Barbie's vlogs now.

Yeah… I never thought I'd say that at some point in my life.

Barbie has been keeping it real with her Barbie Vlog series since 2015, exploring topics big and small. One day, she might be cooking with friends, and the next, discussing the tale of Frida Kahlo and her accomplishments, or even Amelia Earhart.

The latest episode was Episode 62, “Real Life Algorithms.” Ken even joins her for that one, much like he does in several other vlogs. Ken discusses how Barbie has taught him to become better at coding, which is probably the coolest thing we’ve ever heard about Barbie.

The “sorry” video seems to have prompted people to watch Barbie’s other vlogs—and fans are talking about how the videos affected them on Twitter.

barbie vlogs are actually quality content. it's been a guilty pleasure of mine but now y'all should watch them

The reason why i still watch barbie vlogs, cause her possitive message pic.twitter.com/iIi0DX3DjR

It looks like there are a bunch of new Barbie stans.

im forcing my future kids gonna be forced to watch barbie vlogs. I DONT CARE IF I GOT SONS. https://t.co/MOY7N5PooU

All of y’all need to watch these Barbie vlogs, y’all will learn a thing or two. Sis be speaking truth about today’s society.

No matter your problems, you can find a Barbie Vlog that can offer you useful advice, ranging from how to deal with depression or general sadness, and what happens when jokes go too far.

So go forth, and enjoy all the Barbie Vlogs with reckless abandon. The entire internet is behind you, so don’t be embarrassed. This is a whole new Barbie, and we’re totally here for it.

i always complain about how tired i am every morning. right now i could be sleeping but instead i’m watching barbie vlogs pic.twitter.com/9Ob0uAkkNs

Just…try not to lose any sleep over it. There’s plenty of time to bask in Barbie’s sweet, positive light. Sis is gonna keep breaking it down for years to come, hopefully.