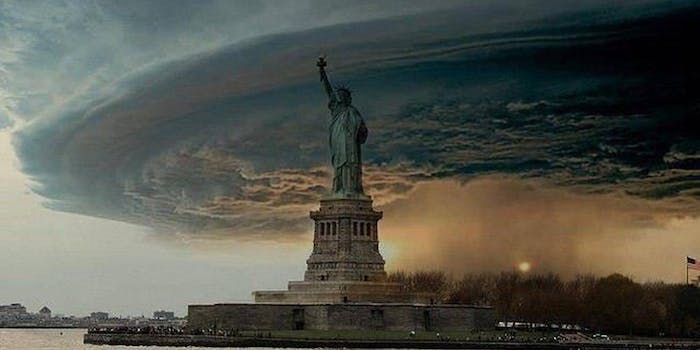 The InformaCam app takes advantage of sensors already in most smart phones to help verify the conditions and locations in which videos are shot—using built in GPS, temperature, altitude and speed monitors.

If there’s one thing the media loves, it’s compelling images of breaking news shot on location in real time.

If there’s one thing they hate, it’s correcting themselves after the fact.

It’s an all too common cycle in the age of digital news: user-submitted footage taken with a mobile camera purporting to show a real event later turns out to be exaggerated or flat-out fabricated. Hurricane Sandy is the most notable recent example of this phenomenon from which not even world leaders were spared.

But now one group is trying to bring a little more transparency to the process with a new app and metadata standard that promises auto-verification of a photo’s legitimacy.

“There’s a lot of citizen-shot media coming into news desks around the world,” said Bryan Nunez, a technology manager with the human rights advocacy group Witness, which is developing the app. “All kinds of stuff is coming off YouTube where the reporters say ‘This appears to show x, y and z … but we can’t verify it. But they show it anyway.”

Nunez told the Daily Dot that ensuring the authenticity of mobile images is a critical priority for Witness, which is dedicated to bringing attention to human rights abuses around the globe through documentation. In war-torn nations like Syria, Libya, and Egypt, controlling information has become a key part of the battle. The ability to ensure a video is documenting the event it claims to, and that it hasn’t been tampered with, is important for getting an honest representation of events in geopolitical hotspots where the truth is hard to come by.

The InformaCam App, which is currently in alpha testing, is a joint project between Witness and the Guardian Project that has been in development for more than a year. The app is being funded by a $320,000 grant from the Knight Foundation as one of several winners of a mobile news development contest.

Nunez said the app would take advantage of sensors already in most smart phones to help verify the conditions and locations in which videos are shot—using built in GPS, temperature, altitude and speed monitors. The app would also make use of an instantaneous backup feature, which automatically stores images and videos on a secure server as soon as they are taken. They are encrypted with a special digital signature that can be used to verify any changes or doctoring that might occur after the fact.

The app is not just designed for news outlets to ensure accuracy. Nunez said human rights groups will also benefit. He cited a case from Sri Lanka in 2010, where the U.N. spent months trying to verify the authenticity of a video purporting to show the government execution of Tamil rebels.

“Thousands of man hours were spent examining every frame of this video—the angle of the sun, the location—everything was scrutinized for months,” Nunez said.

The U.N. ultimately decided the video was real.

However, the app still has a way to go in the development process. One of the biggest challenges is establishing the back-end infrastructure for the site in the volatile regions where the app is expected to do the most good. Nunez said Witness is working with local humanitarian groups to set up the necessary servers and other infrastructure.

In the end, it’s unclear what shape the app will take. Although the alpha version is available on Android, Nunez said InformaCam is more about promoting the new JSON Evidentiary Mobile Media Metadata standard. The J3M standard, as it is sometimes called, provides more information about how a photo or piece of footage was gathered. It’s Witness’s hope that J3M will become a standard format in all mobile photos and videos, similar to traditional formats like JPEGs and TIFFs. That way, users wouldn’t have to even download an actual InformaCam App; the data would already be embedded in sites like Instagram and Youtube.

“Hopefully we see fewer and fewer of these phony images on the news,” Nunez said.