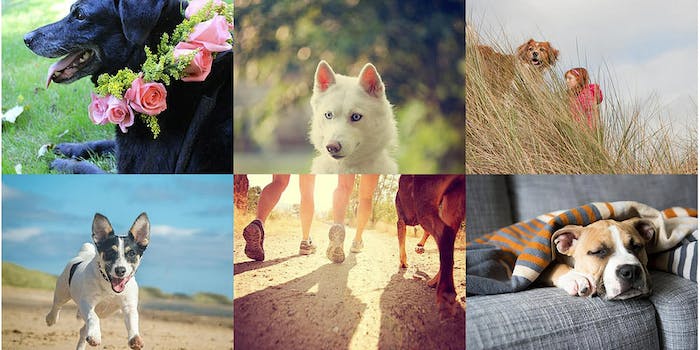 Here they are, the 5 best photos from National Dog Day

With all the quality work out there, it was certainly hard to only pick five dog photos.

Most of all, though: We take dogs seriously.

Since its founding back in the ye olde colonial days of 2004, all of our staff members—including freelancers—have celebrated National Dog Day in the same classical, traditional fashion as it was first celebrated in, way back when people still rented movies from trading posts called “Blockbusters,” and no parent in the country knew how to access their children’s text messages on their brick cell phones.

For every August 26th, every staffer obtains a dog from wherever they can find one, and they take a picture with it. This applies to everybody, even staffers who already own dogs, because nothing is more embarrassing than being seen with the same dog two years in a row.

A lot goes into these photos: The angles must be perfect, the expressions on the dogs’ faces must be both magical and in-focus, the background needs to be exciting enough to show that you gave half a shit about the holiday, there must a distinct bond felt between the dogs and the humans, and, most importantly, the dogs themselves need to look fucking cute. That’s not to say the dog needs to be a cute breed, or look cute all the time, but it needs to look cute in the moment. Indeed, the most magical of all NDD photos are those that feature an ugly dog but manage a temporary cuteness.

Is the only dog you can get your hands on a poodle/shih tzu mix with a horrifyingly human-looking face? Put a baseball cap on that monster’s head and see how many shares you get for that bad boy. Somebody in Washington state produced that exact photo for last year’s NDD, and it’s still the background image on my computer.

When we heard that the holiday’s official website was holding contests to determine the best pictures taken on this year’s NDD, we had mixed emotions. On one hand, we were insulted that nobody had asked us to judge the photos. On the other hand, this was the wake-up call we needed to start a contest of our very own. We vowed that—before we even returned our NDD dogs to or neighbor’s backyards where we’d found them—that we’d have our contest winners posted on our site. People need new background images, for their phones and computers, and the only contest that we trust for those purposes is the one that we hold ourselves.

Speaking of backgrounds, the prize for each photographer listed here is a very special one: The satisfaction of knowing that at least three writers at the Daily Dot will use your photograph as a background image for something or other.

According to topsy.com, over 650,000 images were tweeted with the hastag #NationalDogDay in the past week. You might think that’s simply too many images for us to judge, but rest assured: We selected our winners with the same amount of integrity and sacrificed time that any other arts-related festival would put toward finding the absolute Best of the Best.

And so, without further adieu, onto the winners:

While the setting may not be the most exciting, the sheer dedication to getting this many small dogs in a single, close-up shot is admirable enough to more than make up for the doorway setting.

This dog is so small, and so cute, that I’d wager that most of our staffers, had it been their Photo Dog, would have held onto it for an extra few months after NDD had passed—this dog clearly has at least three months before its nuisance outweighs its cuteness. What a dog photo, though… A neon-yellow tennis ball, with a dog no larger than the ball it’s attempting to play with. This is what NDD is all about, folks.

Looking at the rest of @JammyPost’s photos, it became a little unclear as to whether this was an original work or not. Clearly, we’d need to find another photo if it wasn’t. So, moving on…

Sometimes the best NDD photos come right out of left field, and this is one of them. Chiara-Rose says her dogs are spending the day at work with her. They’re on a pillow, pulled by a chain, posing with a piece of wood, doing who-knows-what. What kind of work is this person doing? How are those dogs cool enough to just sit on a pillow that’s being dragged across unpaved ground? Yes, it’s the mysteries that make this a true standout NDD pic.

It's #NationalDogDay! Rt if you love dogs as much as we do :) pic.twitter.com/qTroQKokqK

OK, OK—this is clearly not an original work, which means that it has no place on this list of winning photographs whatsoever. I mean, it’s not even posted by a person—it’s posted by a company called Crowdfire, which sounds like it sells fires to crowds, and that’s obviously an incredibly unsafe and unscrupulous business practice. Honestly, I don’t feel that we should be giving any promotion to a crowd-igniting company at all.

But here’s the deal: The dog has glasses on it! I’m laughing so hard at this picture that I can’t even remember what the paragraph above this one said, and I’m not going to go back and read it. Glasses! On a dog! Where do they come up with this stuff?!

While these NDD photos have all been real hoots to look at, I believe top honors must go to this one. Is the background interesting? No. Is the dog’s expression interesting? No. But let’s stop the traditional judging right there—this woman has had her face, and her dog’s face, surgically removed and swapped. Our judging panel pent a long time analyzing this photo for signs of doctoring, and we’ve concluded that, without a shadow of a doubt, the faces of the owner and the dog have been switched by means of Mad Science. Once we knew this was definitely the case, I immediately threw up.

There’s a rule in art: If you throw up, it’s because your very soul has been touched. So congrats to Emma, and congrats to that dog. I expect to be throwing up quite often for a while, as your winning photo has become my iPhone 6’s new background image.