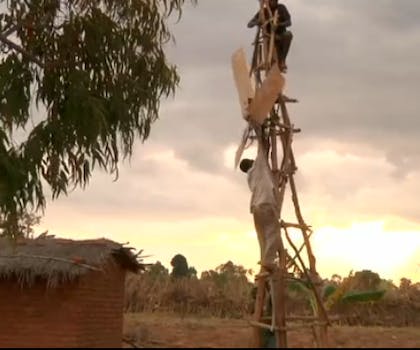 William and the Windmill joins Inocente in the ranks of award-winning films that got their start through crowdfunding.

This is shaping up to be a great year for Kickstarter-funded films.

William and the Windmill was awarded the Grand Jury Prize in the documentary feature category at the 2013 South by Southwest Film Conference and Festival on Tuesday night.

The documentary film focuses on William Kamkwamba, a Malawian teenager who made headlines in 2001 after building an electricity-generating windmill from scrap parts that saved his family and community from famine. Kamkwamba’s invention propelled him to fame, which resulted in co-authoring the New York Times bestselling book The Boy Who Harnessed the Wind and led to appearances on The Daily Show with Jon Stewart, Good Morning America, and a 2007 TED talk.

According to the film’s official Twitter account, William and the Windmill received a standing ovation after its premiere screening.

The film was made possible thanks in part to the popular crowdfunding platform Kickstarter. Director and producer Ben Nabors launched his campaign in November 2011 in hopes of raising $40,000. William and the Windmill had raised $111,545 from 376 contributors when the campaign closed.

William and the Windmill becomes the second Kickstarter-backed movie to win a major film award in 2013 after Inocente took the Oscar at the 85th Academy Awards for best documentary short.