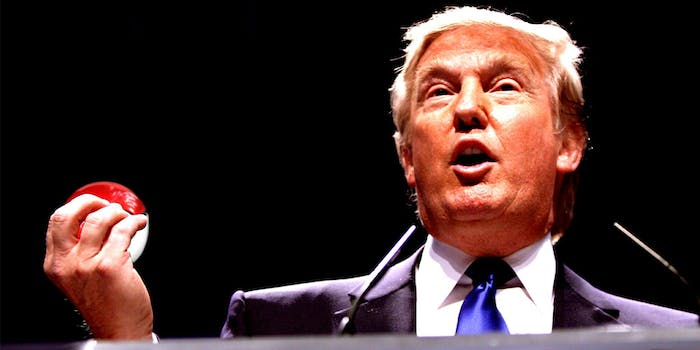 Does Trump believe in evolution, or is he just going to keep his Charmander a Charmander forever?

The result was, unsurprisingly, a swirling mass of angry citizens hammering Trump on his nativist rhetoric, comparing his hair to grocery store produce, and generally treating this pointless publicity stunt with all the seriousness it deserves. Since Trump is less a corporeal being than a concentrated mass of pure ego feeding solely on the constant attention of a cynical public, #AskTrump was an unqualified success.

But to be fair, there were a number of serious policy questions people asked about the single most important political issue of our day—Pokémon. What follows are the most insightful, probing, trenchant queries the former Celebrity Apprentice host received about Pokémon.

#AskTrump do you feel that the introduction of mega evolutions to Pokemon cheapened the competitive Pokemon meta game??

Have you ever defeated Brock with a level 10 Pikachu? #AskTrump

#AskTrump What is your postgame route for Pokemon Ranger: Guardian Signs All Rangerdex?

— Do Not Watch The Game Of American Football, Please (@LakdifFlanchzed) September 21, 2015

#AskTrump Is Charizard the strongest Pokemon?

#AskTrump if you had to live on $20 per day would you buy Nintendogs for DS OR a whole bunch of pokemon cards (asking for a friend)?

It doesn’t appear as if Trump has taken a public stance on evolution yet, so this hashtag campaign seems like a perfect time for him to clarify his position on whether he disputes the theory or if he has plans to eventually evolve his Squirtle into a Blastoise.

Trump currently leads the polls in the Republican field by a wide margin. He has already defeated the gym leaders in Wisconsin and  Texas.

When it comes to the general election, however, Trump fares poorly in a hypothetical match-up against Democratic front-runners Team Rocket (pictured below).