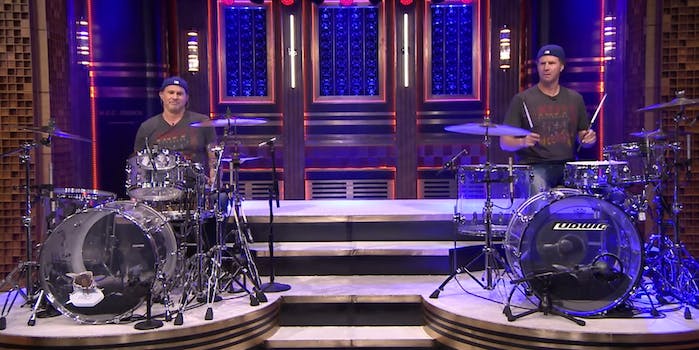 It's not over until the drumsticks drop.

It’s not often you can talk to your real-life doppelganger, let alone have a drum-off against him.

Will Ferrell and Red Hot Chili Peppers drummer Chad Smith look uncannily similar to each other, which has caused a lot of confusion among fans over the years. After Ferrell finally admitted to being Smith a few months back, Smith challenged him to a drum battle for the ages, but not before raising $300,000 for the nonprofit Cancer for College, which awards scholarships to cancer survivors.

The rivalry came to a head when they both appeared on The Tonight Show, which was probably the perfect setting for their drum-off. The pre-drum-off interview clip above is full of insulting exchanges, and both show that they know a few things about playing it up for a crowd.

But when the secret weapons came out to play, all bets were off.