Wikipedia for the Weird: List_of_fictional_ducks

No matter where you go in the world, fictional ducks have surprisingly boring last names. "Duck," for example.

Have you ever delved into the Wonderful Wild World of Wikipedia? It’s practically a safari in there: species on species on species of classified (and unclassified) animals. But what about those animals that aren’t so… real? Fictional animals should have their own world within the species, and on Wikipedia they (THANK GOD!) do. So while you’re learning all about the world of wild birds and native boar, why don’t we head over to the magical land of fictional ducks?

In the long-held tradition of the most famous fictional duck, Disney’s Donald, most fictional ducks are also given “Duck” (or, if related to Scrooge McDuck, “McDuck”) as a surname. Do you know that basically every duck in Donald’s world is ALSO named _____ (Mc)Duck? It’s kinda creepy how they are all related. They are also all pretty, I dare say, boringly, surnamed:

…to call out just a few.

What about the ducks that live outside the world of (Mc)Duck? These are the ducks that dare to live outside the… pond. Ducktales gave us ducks named Gandra Dee and Webby Vanderquack, while Daffy’s girlfriend on The Looney Tunes Show was the unusually-named “Tina Russo”. Queer Duck aka Adam Seymour Duckstein was the protagonist of “the first animated TV series to have homosexuality as its predominant theme,” while Eric Tiberius Duckman was voiced by Jason Alexander.

And how could we forget “The Aflac Duck” (whose name is apparently…“The Aflac Duck”) who so loudly quacked about health insurance? Did you know that the Aflac Duck’s voice-giver, Gilbert Gottfried, was replaced after making offensive comments about the Tōhoku earthquake and tsunami on Twitter? That he was replaced by a casting call on a site called QuackAflac.com? Well, now you do. 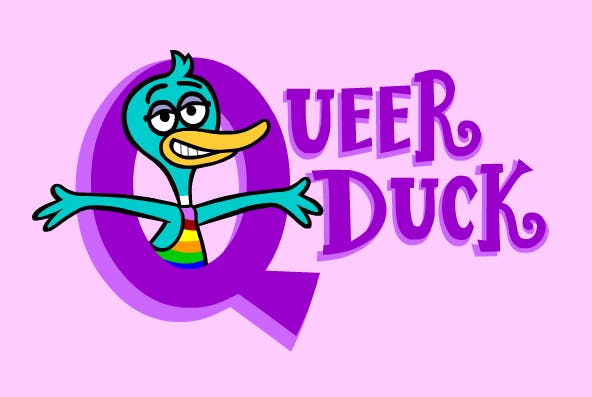 What are fictional ducks like in other countries? Not much more creative, I’ll say. There’s a Dutch duck called “Alfred J. Kwak” and an Irish duck named Dáithí Lacha (“Lacha” means “Duck”.  Plucka Duck is Australian, while Pato is a Spain-based duck–whose name also means duck in Spanish.

Step it up, fictional ducks, or we’ll start linking you extensively to the fictional wolves entry.