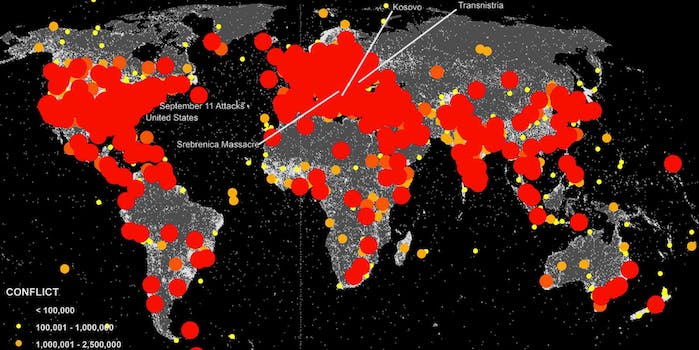 Some of the most epic flame wars the internet has to offer can be found behind the scenes of Wikipedia's more than 37 million articles.

The next time you’re bored and find yourself falling deeper and deeper down a Wikipedia rabbit hole, here’s a tip to get a little extra entertainment out of the world’s largest online encyclopedia. Try clicking the “Talk” page tab at the top of whatever article you’re reading.

On Wikipedia, this is your chance to see how the sausage gets made. Some of the most epic flame wars the internet has to offer can be found behind the scenes of the site’s more than 37 million articles. The talk page for the main article on President Barack Obama is particularly lively, as every minor gaffe, such as Umbrellagate, usually warrants some kind of partisan dust-up. Similarly, articles on the Persian Gulf, President George W. Bush, and even Jennifer Aniston generate some amusingly passionate debate.

Not to mention the debate over capitalizing the I in Star Trek Into Darkness, which accumulated about 40,000 words and screwed up Google results for weeks.

Looking at these talk pages, it becomes clear in a short amount of time that controversy is the backbone of Wikipedia.

That was the observation that sparked a mammoth undertaking by a quartet of researchers from Europe and the United States, who’ve cataloged Wikipedia’s most controversial articles and mapped them. Their work has illuminated some underlying trends and made it clear that what we fight about remains largely the same despite technological advancement.

“We were very surprised seeing that, although Wikipedia is a very modern platform and it’s truly a product of the digital age and internet-based life, the disputed and debated topics among its editors are the same as the very ancient controversial topics: ‘Gods and Land,'” said Taha Yasseri, one of the Oxford University researchers behind the Wikipedia Conflict Map. 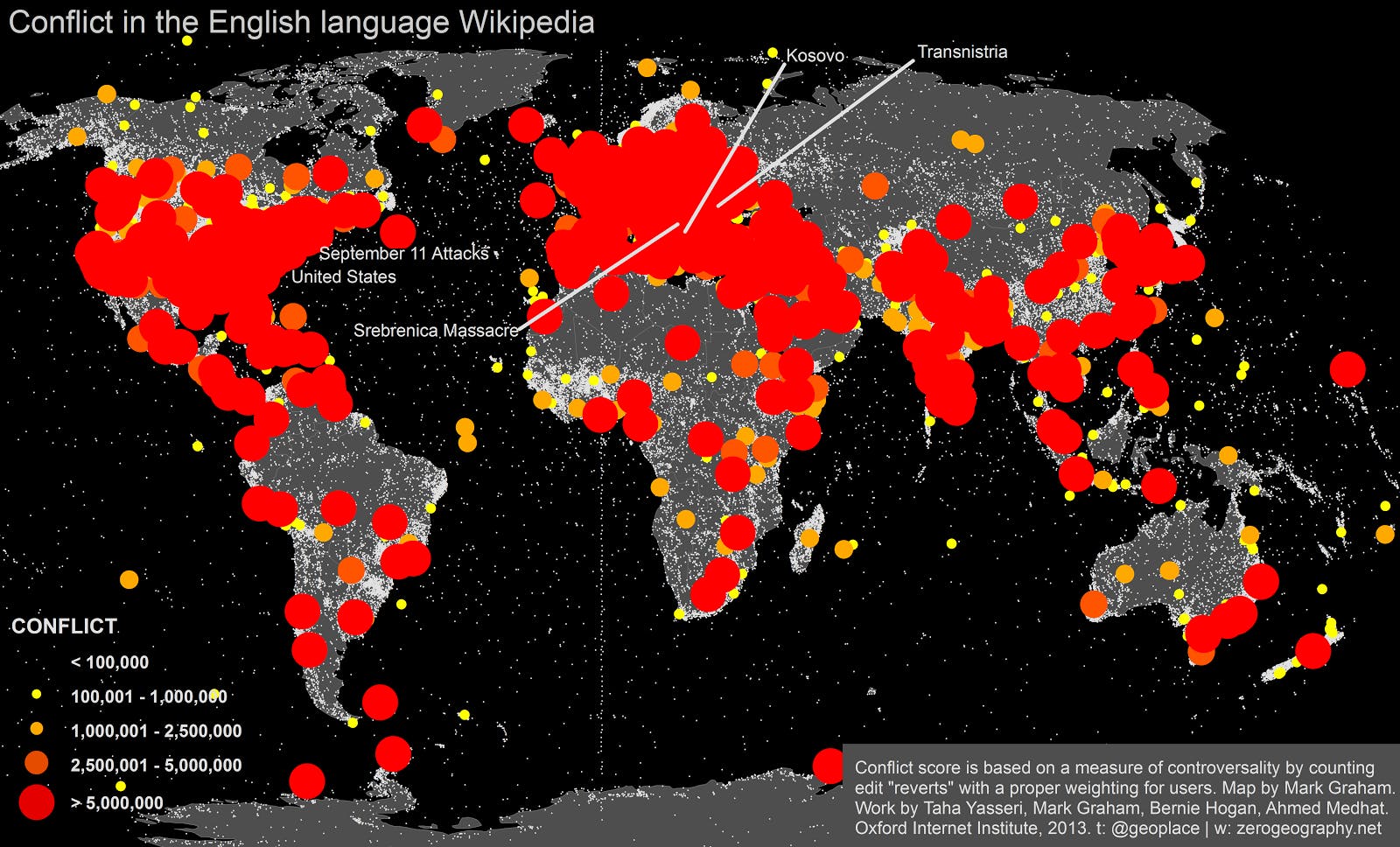 For two years, Yasseri and his colleagues have sifted through the entire history of edits from Wikipedia’s first decade of existence. They looked for “reverts,” instances in which one Wikipedia editor corrects another. They catalogued these occurrences and gave additional weight to instances of multiple reverts on the same topic. This is how they came up with their measure of controversy.

What they found was that conflict on Wikipedia centered around the same things that generate conflict in any other public or private forum: politics and religion. In English language Wikipedia for example, the most contentious articles were about Bush, Anarchism and Muhammad. In French, the leading sources of controversy were politician Ségolène Royal, UFOs, and Jehovah’s Witness.

But Yasseri said that there was some variation between language editions of Wikipedia that became more clear when mapping the results. The researchers found the broadest geographic and topical distribution of controversy among the English, French and German editions of Wikipedia, a likely byproduct of how widely spoken those languages are across the world. Conversely, some versions of Wikipedia had a much narrower focus. On the Czech and Japanese versions of the site, the leading controversial topics were centered in the countries of origin. Similarly, the Portuguese Wikipedia found most of its controversies in Brazil, the world’s largest Portuguese speaking nation, where four of the five most controversial topics had to do with soccer. 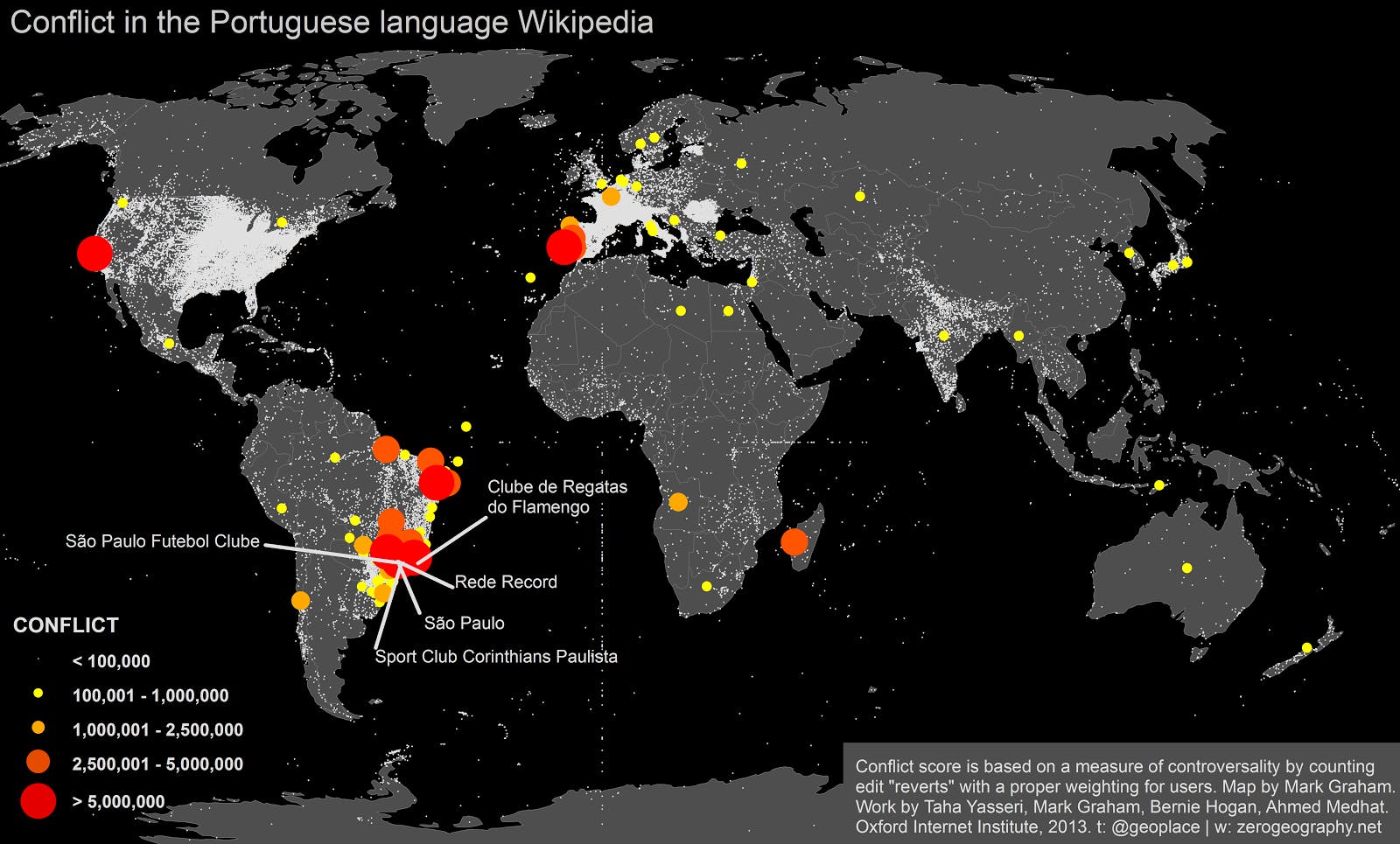 “Understanding the geography of conflict on different Wikipedia language editions gives us fascinating insights into what different groups of people feel is worth fighting about,” said Mark Graham, another research fellow at Oxford University and one of the study’s coauthors.

The Portuguese fixation on soccer was just one of the examples of how a particular version of Wikipedia can become obsessed with debating a topic that editors in other languages couldn’t care about less. It’s the same reason why you’re much more likely to find serious debates about manga and anime in Japanese Wikipedia than on any other version of the site. That being said, some globally significant topics, like the Israeli-Palestinian conflict, proved controversial across multiple languages.

The Wikipedia Conflict Map is not the first of its kind. In recent years, more and more researchers have been developing maps and live feeds aimed at using Wikipedia’s larger metadata trends to reveal information about the site and the community of editors that maintain it. Wikipedia, suffering from a drop-off in editors recently, has commissioned a number of self-examinations to help better understand Wikipedian culture and how to foster the best information for general users.

In that vein, the makers of the conflict map hope their research can also be used as a diagnostic tool for the site.

“Wikipedia and similar platform(s) could take this as a lesson and reconsider their structure and workflow towards a more connected community of editors,” Yasseri said. “Although diversity is one of the useful features of Wikipedia, sometimes a small community of editors of some language editions spend a huge amount of time and effort to deal with very local issues and therefore more general topics with higher priorities will be overlooked and paid less attention.”