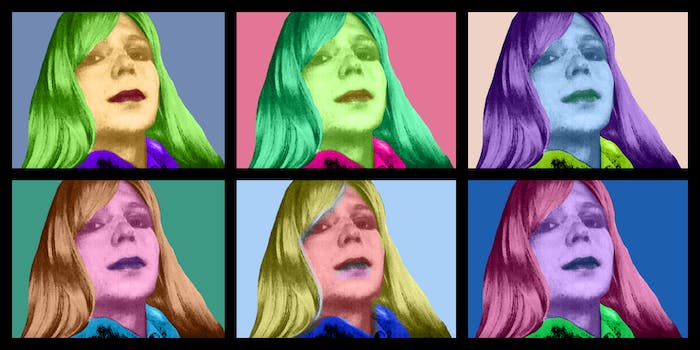 Wikipedia’s arbitration committee has taken action against editors who insisted that the whistleblower go by her former name, Bradley.

Wikipedia’s arbitration committee has taken action against editors who insisted that whistleblower Chelsea Manning, who is trans, go by her former name, Bradley.

They are now prohibited from editing any page related to trans issues.

Manning is one of the most controversial American figures in recent memory, for reasons wholly unrelated to her gender identity. A former Army intelligence analyst, she leaked classified Army documents in 2010, including video footage of a U.S. helicopter gunning down civilians, to WikiLeaks, which in turn published them wholesale. She’s currently serving a 35-year prison sentence.

Soon after her conviction for, among other things, violating the Espionage Act, Manning came out as trans, asking the world to refer to her with the feminine pronoun and new first name Chelsea. While the media slowly obliged, Wikipedia dragged its feet. A raucous debate broke out between editors. One would change her article’s title to Chelsea, another would change it back to Bradley. Nine days after her announcement, Wikipedia locked Manning’s page from being altered and temporarily settled on Bradley.

But after Wikipedia finally decided that entries’ names, just like people’s, can change, five different editors, some accused of extreme transphobia, were banned “from all pages relating to any transgender topic or individual, broadly construed.”

As the Guardian noted, some of those editors resorted to slurs on trans people.

“Only when his testicles are ripped out of his scrotum and replaced with synthetic ovaries and has his sex changed from ‘male’ to ‘female’ will I call Manning a ‘she,’” wrote one banned editor, Hitmonchan. Another, IFreedom1212, wrote that Manning’s request go unheeded because “he is clearly mentally unstable and his latest remarks and desire to be called Chelsea should not be regarded with any merit until the words are matched by some serious and tangible action.”

Since the ban, Hitmonchan’s account hasn’t been touched. And IFreedom1212 appears to have been deleted.